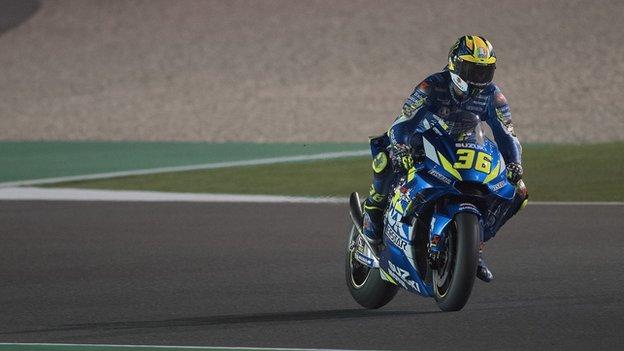 The new MotoGP season gets under way in Qatar this weekend with six-time champion Marc Marquez not yet fully recovered from injury.

Spain's Joan Mir won the championship last year in the absence of Marquez.

The focus will also be on Italy's Franco Morbidelli and Spain's Alex Rins, who finished second and third to Mir last season.

Seven-time champion Valentino Rossi, 42, has joined a new team for the start of his 21st MotoGP season.

Mir says he is "surprised" Marquez isn't racing in Qatar, but the Honda driver could return for race three.

"It will be difficult for him to restart in Portimao [Portugal] and fight for the championship," he added.

The 2020 season was postponed and eventually started in July with all 14 races held in Europe due to the coronavirus pandemic.

Marquez broke his humorous in the first race in Jerez giving five riders the chance to claim maiden victories and Suzuki's Mir to clinch his first MotoGP title.

A full calendar of 19 races across the world returns this year, with the first two taking place in Qatar.

Practice starts on Friday with qualifying set for Saturday and the race will take place on Sunday.

Australia's Jack Miller has impressed in testing after joining Ducati, who haven't won a title since his fellow countryman Casey Stoner was victorious in 2007.

Miller joined from Pramac Racing and said "there's extra pressure – it feels like a step up."

"To compare me with Casey is completely wrong. What he did in 2007 was spectacular and I don't think it will be repeated," he added.

Veteran Rossi returns for the 21st MotoGP season of his record-breaking career, and still feels as hungry as ever as he eyes a 200th premier class podium.

"It's like the first day of school," said the Italian rider, who is currently sat on 199 podium appearances.

"I've changed teams after a long time but I feel good – I've become older but my passion for motorcycles and MotoGP is still the same.

"I hope it's not my last year but it will depend on the results."

Extreme E: Nico Rosberg says sport must have a purpose