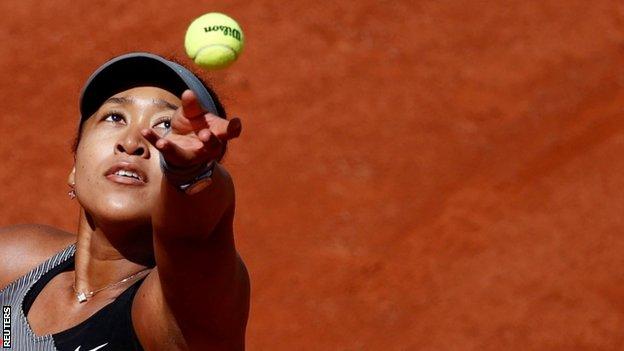 Naomi Osaka has called for "privacy" and "empathy" from the press when she returns to action, saying she never wants her personal medical history to be scrutinised again.

"In any other line of work, you would be forgiven for taking a personal day here and there, so long as it's not habitual," she wrote in Time magazine. external-link

She continued: "You wouldn't have to divulge your most personal symptoms to your employer; there would likely be HR measures protecting at least some level of privacy.

"Perhaps we should give athletes the right to take a mental break from media scrutiny on a rare occasion without being subject to strict sanctions."

When Osaka did not fulfil her media commitments at Roland Garros, organisers fined her.

Grand Slam organisers said she could face expulsion from the tournament should she refuse to take part in media duties.

The four-time Grand Slam champion then withdrew the following day, revealing she had "suffered long bouts of depression" since winning her first major at the 2018 US Open.

"I felt under a great amount of pressure to disclose my symptoms – frankly because the press and the tournament did not believe me," she said.

"I do not wish that on anyone and hope that we can enact measures to protect athletes, especially the fragile ones. I also do not want to have to engage in a scrutiny of my personal medical history ever again. So I ask the press for some level of privacy and empathy next time we meet."

The four Grand Slams later said they wanted to "create meaningful improvements" in supporting players and that they empathised with the pressures players may face.

Osaka has not competed since the French Open but is due to play at her home Olympics in Tokyo later this month.