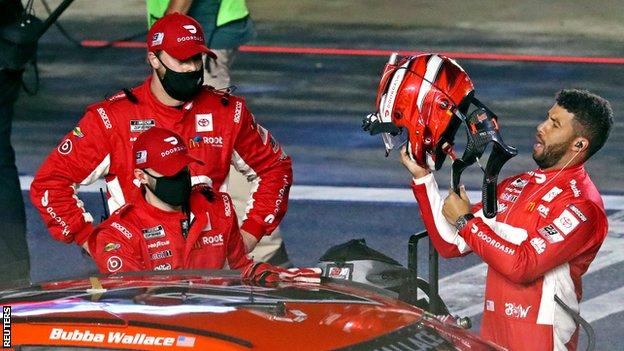 Wallace has driven in the Nascar Cup Series for five years

Wallace was forced to start at the rear of the field after his 23XI car failed multiple pre-race inspection checks.

He led for one lap of the season-opening 200-lap race, which was delayed for over five hours by heavy rain.

Denny Hamlin, who is a minority owner in the Jordan team and who was aiming to become the first driver in history to win the race three times in a row, led for 98 laps before finishing fifth.

Wallace, who finished second in the race in 2018, was originally due to begin from the sixth starting spot but his car twice failed inspections, before finally passing on its third attempt.

The only black driver at Nascar's top level, Wallace has been a prominent voice in calling for change in the fight for racial equality.

Bubba Wallace says 'things are changing for the better'
Source