Sciver strikes half-century off 24 balls and shares blistering stand with Amy Jones, who blasts 43 before falling to incredible catch by Harleen Deol; rain ruins India’s chase with tourists stuck on 54-3 in pursuit of a target of 178 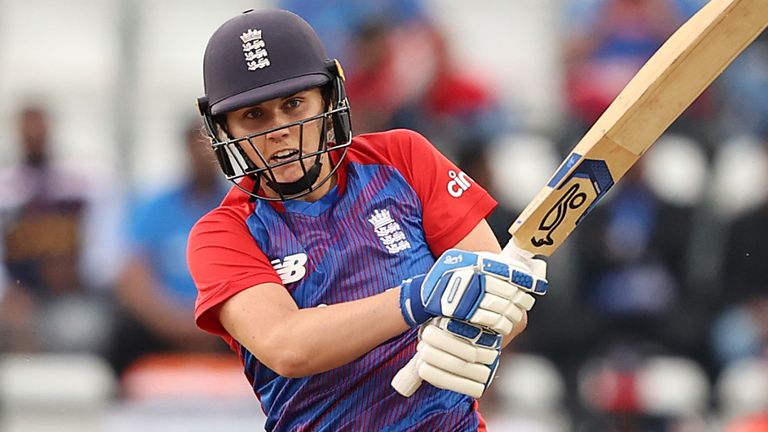 Natalie Sciver struck eight fours and one six, scoring at a strike-rate of 203.70

Nat Sciver smote the fastest T20 fifty in England Women history to power the hosts to an 18-run win over India Women on the DLS method in the first Vitality Twenty20, at Northampton.

Sciver (55) raced to her 10th half-century in the format off just 24 balls, sharing a devastating 78-run stand off 42 balls with Amy Jones as England stepped on the gas to post 177-7.

It might have been more but Jones’ blistering 43 was cut off in its prime by a sensational catch at long-off by Harleen Deol, who off-loaded the ball as she stepped over the boundary before diving back into play to complete a stunning dismissal. 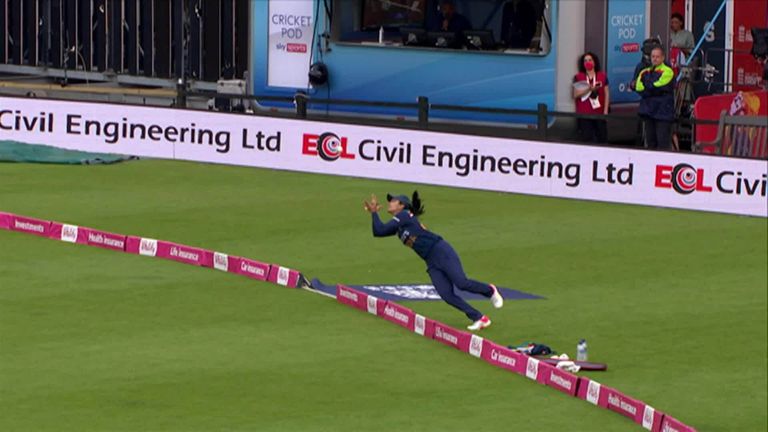 Even so, India were left needing to register their highest-ever successful chase and they lost Shafali Verma for a second-ball duck before rain ended the match prematurely with the board reading 54-3.

The result means Heather Knight’s side can’t lose the multi-format series having improved their points lead to 8-4 with just two T20s to come – on Sunday and Wednesday, live on Sky Sports Cricket.

In addition, England have now won all seven of their T20s at Northampton, having batted first each time.

On this occasion, they were put in after Harmanpreet Kaur won the toss. England’s openers Tammy Beaumont (18) and Danni Wyatt (31 off 28) accumulated quickly from the off but tight Indian fielding ensured the first boundary didn’t come for 3.4 overs.

Three more followed in the remainder of the powerplay – England accelerating to 48-0 off six overs – only for Wyatt to snick behind attempting to reverse sweep Radha Yadav eight runs later. Beaumont gifted her wicket away soon after, lofting a 36mph delivery from Poonam Yadav to Smriti Mandhana at long on.

Sciver, who creamed her first ball through point for four, opted to take the pace-off tactic on and advanced to drive Radha Yadav over extra cover for a magnificent six.

India stayed alert – Deepti Sharma fielding superbly off her own bowling to run out Knight (six) – but struggled to contain Sciver, who struck Sneh Rana for two powerful fours in one over.

From 120-3 off 15 overs, Sciver cut loose striking Arundhati Reddy for three successive fours and with Jones mirroring her intelligent use of the crease and powerful boundary striking, the fifty stand was quickly up off 28 balls. 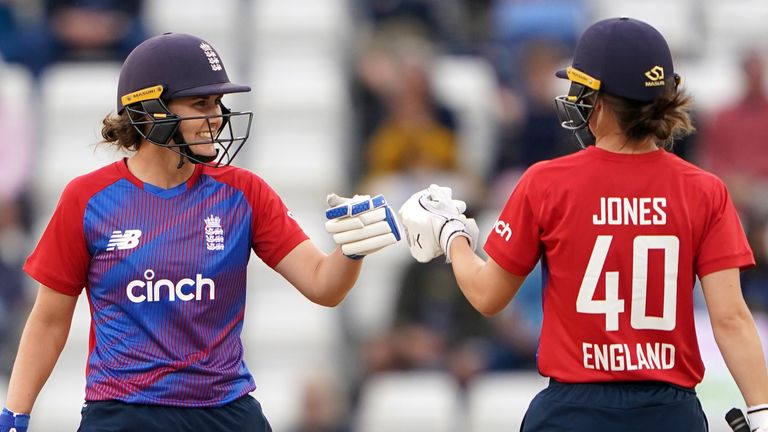 It took a stunning catch to dislodge Sciver – Kaur diving forward at long on to earn India some much-needed respite.

If that was brilliant, Deol’s catch to dislodge Jones was outrageous. A third wicket in the over followed for Shikha Pandey (3-22) as Sophia Dunkley was stumped with her back foot in the air attempting to cut

Katherine Brunt (1-11) rocked the start of India’s chase by clipping Verma’s leg-stump with the second ball of the innings as the opener tried to make room.

India had time to add only seven more runs before rain intervened and with heavy showers set in the officials had no option but to call time on the contest.

Watch the second T20 international between England and India live on Sky Sports Cricket from 2pm on Sunday.