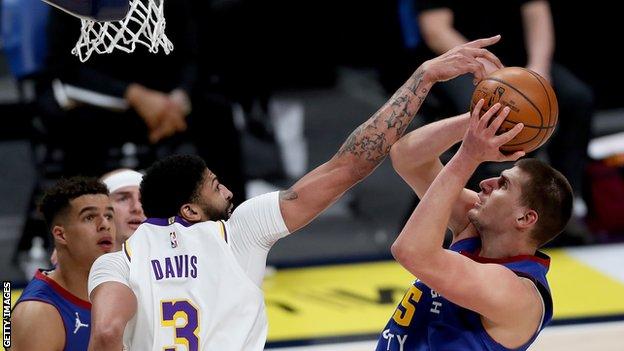 Los Angeles Lakers forward Anthony Davis suffered a recurrence of his Achilles injury as his side lost 122-105 to the Denver Nuggets.

Davis, who missed two games last week with the same problem, was forced out late in the second quarter after a foul by Nikola Jokic.

The 27-year-old has some swelling in his right Achilles and will have a MRI scan on Monday.

He left the game after scoring 15 points in 14 minutes.

Durant leads Nets to victory with 20 points against Warriors

When Davis retired hurt, Denver were only 60-55 ahead but they then scored 10 straight points to help them take a 73-61 lead into the break.

They continued to dominate after that, leading by as many as 21 in the fourth quarter as they cruised to a win that ended a seven-game winning streak for the Lakers.

Jamal Murray top-scored on 25 points for the Nuggets with Jokic adding 23 while LeBron James contributed 22 points, 10 rebounds and nine assists for the Lakers.