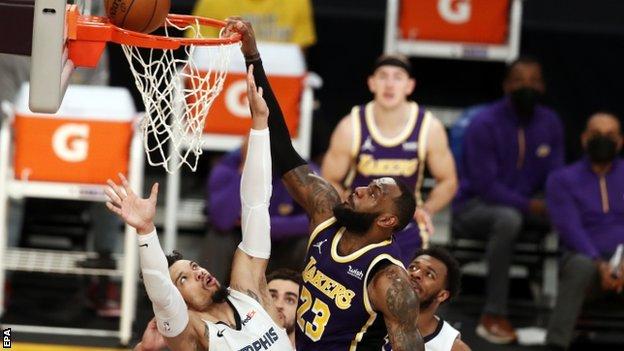 LeBron James had 28 points, nine rebounds and eight assists as the Lakers rallied from 22-2 down

The Los Angeles Lakers recovered from an early 20-point deficit on Friday to beat the Memphis Grizzlies 115-105 and secure their seventh straight win.

Anthony Davis returned from two games out with Achilles soreness to score 35 points as the Lakers improved to 21-6.

LeBron James had 28 points for the Lakers, who have the second-best record in the NBA behind the Utah Jazz (21-5).

Four Jazz players scored at least 25 points as they beat the Milwaukee Bucks 129-115 for their sixth straight win.

Two-time MVP Giannis Antetokounmpo had a game-high 29 points in defeat for the Bucks, who slipped to a 16-10 record. 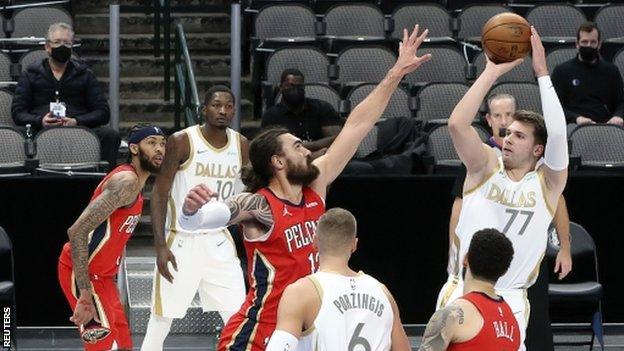 Luka Doncic was picked third in the 2018 draft

Kristaps Porzingis added 36 points as the Mavericks (13-14) claimed their fourth straight win while Zion Williamson, the 2019 number one draft pick, scored a career-high 36 for the Pelicans.

Elsewhere on Friday, Terry Rozier scored 41 points and made two crucial late-game three-pointers as the Charlotte Hornets won 120-114 at the Minnesota Timberwolves.

Kawhi Leonard scored 33 points as the Los Angeles Clippers cruised to a 125-106 victory at the Chicago Bulls and the San Antonio Spurs led by as many as 42 en route to winning 125-114 at the Atlanta Hawks.

The Portland Trail Blazers won 129-110 against the Cleveland Cavaliers, while the New York Knicks beat the Washington Wizards 109-91 and the Denver Nuggets triumphed 97-95 against the Oklahoma City Thunder.

Standing Up To Infertility: Rhod Gilbert with a frank, funny and personally revealing look at the conditionScarlett Moffatt Wants To Believe: What is the theory behind ghost sightings and does it prove anything?
Source