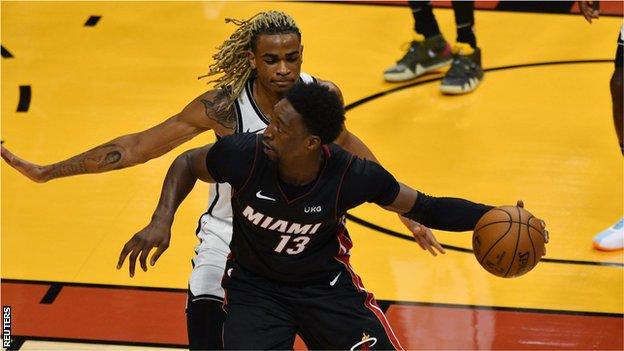 Bam Adebayo finished with 21 points for the Miami Heat

Bam Adebayo's buzzer-beater clinched a 109-107 victory for the Miami Heat over the Brooklyn Nets, who lost Kevin Durant to injury.

NBA All-Star Durant limped off in the first quarter with an injury to his left thigh.

Landry Shamet scored a career-high 30 points for the Nets.

Elsewhere, the New York Knicks won their sixth game in a row with a 122-112 overtime-victory over the New Orleans Pelicans, with Julius Randle leading with 33 points and 10 assists for the Knicks.

The Atlanta Hawks beat the Indiana Pacers 129-117, while the Los Angeles Clippers won 124-105 at home to the Minnesota Timberwolves.

Advertisement
Advertisement
snap a four-game losing run with a 109-101 result against the Portland Trail Blazers.

The Sacramento Kings had lost their previous nine games but got back to winning ways at the Dallas Mavericks, with De'Aaron Fox scoring a team-high 30 points to lead the Kings to a 121-107 win.

Chris Boucher scored 17 of his 31 points in the first quarter as the Toronto Raptors edged out the Oklahoma City Thunder 112-106, consigning the Thunder to a 10th straight loss, while the Houston Rockets beat the Orlando Magic 114-110.