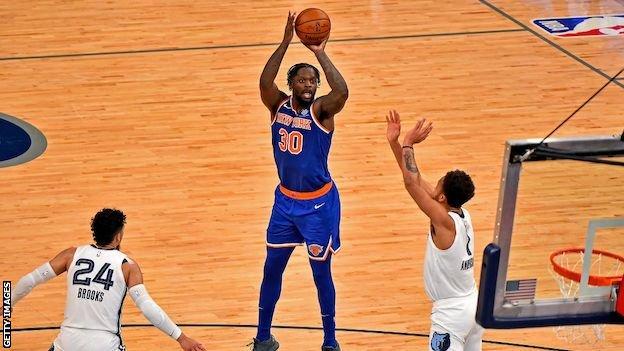 Russell Westbrook and Stephen Curry shone while Carmelo Anthony made history in Monday's NBA action – but the night belonged to the New York Knicks who recorded their 12th win in 13 games.

The Knicks' impressive run was extended with a 118-104 win over the Memphis Grizzlies, with Julius Randle top scoring on 28 points.

Westbrook posted his 32nd triple-double of the season with 14 points, a career-high 21 rebounds and 24 assists as the Washington Wizards won 154-141 against the Indiana Pacers.

Curry scored 42 – his ninth 40-plus point haul of the season – in the Golden State Warriors' 123-108 victory over the New Orleans Pelicans.

And there was movement in the history books as Anthony rose to 10th in the NBA's all-time scorers list, after his 14 points for the Portland Trail Blazers

"Top 10 in anything of all time is a special thing," Anthony said after the Blazers' 123-114 defeat by the Atlanta Hawks.

Elsewhere, the Los Angeles Lakers ground out a 93-89 victory over the visiting Denver Nuggets without star player LeBron James, who was resting a sore ankle.

Full NBA resultsDreaming Whilst Black: Why Kwabena's dream job might mean risking it allCastro vs the World: Fidel Castro's Cuba as told by the spies, revolutionaries and diplomats who shaped it
Source