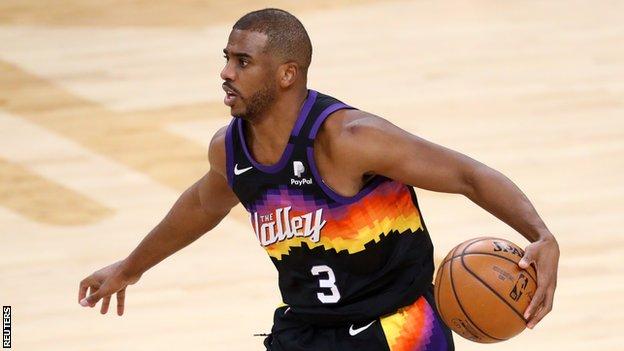 Chris Paul became the sixth man in NBA history to reach 10,000 assists as his Phoenix Suns team beat a Los Angeles Lakers side without LeBron James.

James injured his ankle in a defeat by the Atlanta Hawks on Saturday.

Charlotte Hornets point guard LaMelo Ball could be out for the season after he broke his wrist against the Los Angeles Clippers on Saturday.

The Houston Rockets slumped to their 20th straight loss, a 114-112 defeat by the Oklahoma City Thunder, despite Christian Wood scoring 27 points for the Rockets.

Julius Randle's late three-pointer for the New York Knicks forced overtime, but he then missed a potential game-winner as the Philadelphia 76ers edged to a thrilling 101-100 victory.

The result also went down to the wire in Florida, where last season's finalists the Miami Heat

Blake Griffin had a successful debut for the Brooklyn Nets as he made his first dunk since 2019 in the 113-106 win over the Washington Wizards.

Luka Doncic scored 37 points in the Dallas Mavericks' 132-92 thrashing of the Portland Trail Blazers, the New Orleans Pelicans defeated the Denver Nuggets 113-108 and Jaylen Brown scored 10 three-pointers to lead the Boston Celtics to a 112-96 victory over the Orlando Magic.

There was also a 116-105 win for the Cleveland Cavaliers over the Toronto Raptors, and the Chicago Bulls cruised past the Detroit Pistons 100-86.

Most assists in NBA history