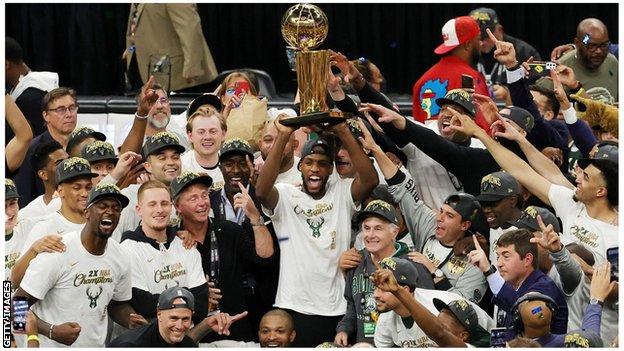 Giannis Antetokounmpo scored 50 points as the Milwaukee Bucks claimed their first NBA title for 50 years with a 105-98 victory over the Phoenix Suns.

They are only the fifth team to win the best-of-seven finals series after losing their first two matches.

"I'm happy I was able to do it with this team for Milwaukee," said Antetokounmpo.

The Suns were seeking a first NBA crown in their 53-year history, having also lost NBA Finals series in 1976 and 1993.

However, they were unable to contain Antetokounmpo, who became only the seventh player to register 50 points in a Finals game.

It was also the third game in the series in which the 26-year-old has managed at least 40 points and 10 rebounds.

Bucks coach Mike Budenholzer described the Greek forward as "a special human being".

"I've learned so much from him. He's a special leader," he said.

"These players are champions every day. They've embraced getting better every day."

Budenholzer was only four years old when NBA legends Kareem Abdul-Jabbar and Oscar Robertson led the Bucks to their only previous NBA tile in 1971, when some of the current players' parents had not been born.

Unlike the 2020 NBA Finals which were played without fans, the Bucks' win kicked off a wild party inside the arena and on the streets of Milwaukee.

More than 10% of the city's population, crowded together in the Deer District outside Fiserv Forum, with some fans waiting in line for five hours before the game to ensure they would have seats.

Isaiah Tyler, a 43-year-old painter who was born and raised in the city, said: "This is history. I grew up here and have gone to a lot of lousy games – so this is the pay-off."

"Milwaukee is a very segregated city, so to see us all together, all races, for one cause, this is how the world should be."

Tom Cogdall, a 63-year-old retired Army officer who lives in Milwaukee, added: "I remember 1971. This was 50 years, we needed it." 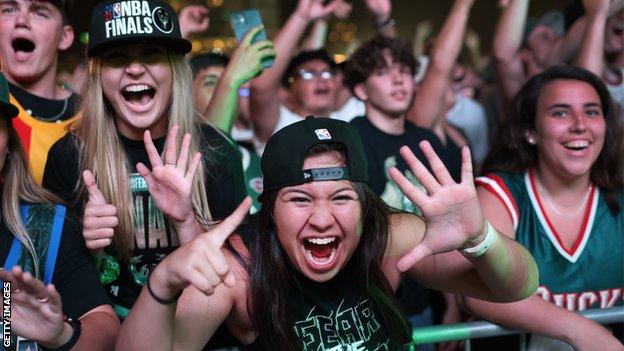 Fans chanted "Bucks in six, Bucks in six" repeatedly through the gameView more on twitter 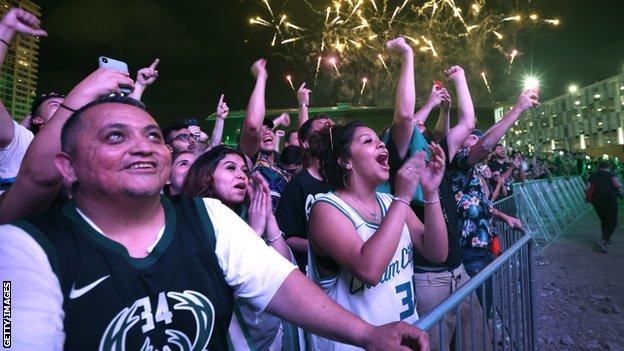 Fans described their relief and joy after the victory

Winning their first two games at home had appeared to tip the series towards the Suns, who last appeared in a Finals when Charles Barkley was playing for them.

However, four consecutive defeats brought the finals to an unfortunate and upsetting conclusion.

"I haven't felt a hurt like this in my life," Suns guard Devin Booker said. "This isn't something you want to feel."