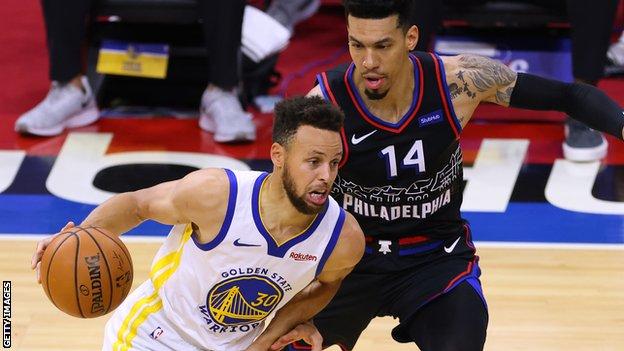 Curry is averaging over 31 points per game this season

"I don't know what else to say," said Kerr. "It's the same thing after every game – utter amazement at this guy's skill level, heart, mind and focus. Just amazing to watch."

Curry's total included 10 three-pointers – five of them in the final quarter – against the Eastern Conference leaders.

It is the 21st time in his career he has hit 10 or more three-pointers in a single game and leaves him as the favourite for this season's NBA Most Valuable Player award.

"Kobe Bryant earlier in his career had a stretch, and obviously Michael Jordan had some stretches where he scored like crazy," Kerr added.

"But nobody's ever shot the ball like this in the history of the game. And even by Steph's own lofty standards, this is above and beyond."

Victory sees Golden State improve their season record to 29-29 as they chase a play-off place from the Western Conference.

The game ended in controversy, with PJ Tucker adjudged to have fouled Booker to set up the winning free-throw for the Suns as a second period of overtime loomed.

The Utah Jazz maintained their lead at the top of the Western Conference with a comfortable 111-97 win over an understrength Los Angeles Lakers.