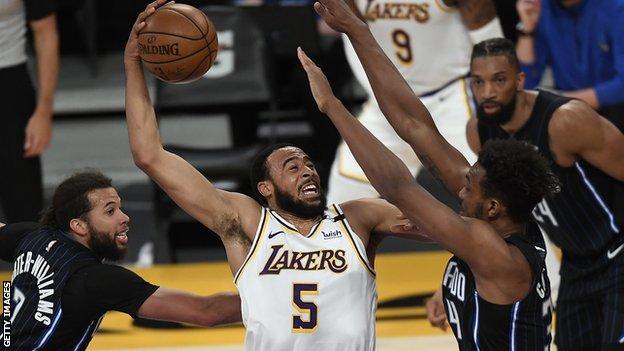 The LA Lakers are fourth in the Western Conference

The injury-hit Los Angeles Lakers held on to beat the Orlando Magic 96-93, despite LeBron James missing a fifth consecutive game with an ankle sprain.

The reigning champions, who are without James and Anthony Davis, have signed centre Andre Drummond as cover.

"We feel extremely fortunate to add a player of his calibre and magnitude to our core group at this stage of our journey to defend the NBA title," Lakers general Manager Rob Pelinka said of Drummond.

The Brooklyn Nets have agreed to signexternal-link seven-time All Star forward LaMarcus Aldridge for the rest of the season.

Aldridge, 35, had previously been with the San Antonio Spurs for six seasons.

The Phoenix Suns moved up to second in the Western Conference after beating the Charlotte Hornets 101-97.