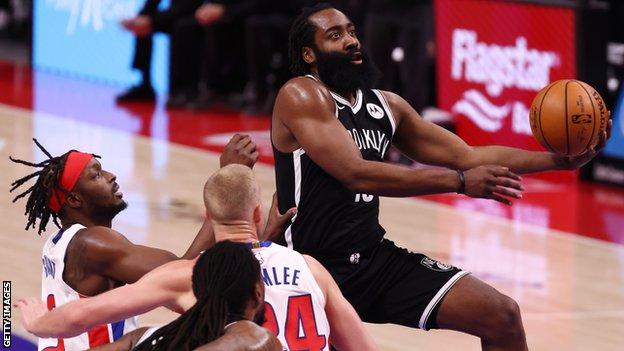 James Harden was named the NBA's Most Valuable Player in 2018

James Harden says he feels like he is the NBA's Most Valuable Player after helping the Brooklyn Nets beat the Detroit Pistons.

Brooklyn have won 24 of their 31 matches with Harden in the team since he joined them in January.

The MVP is given to the best performing player of the season and is voted for by members of the NBA media.

Harden, who was voted MVP in 2018, averages 26 points for the Nets this season.

"Numbers are showing it for itself, and we're winning. That's all I can say," he said.

"I don't want to be speaking individually on myself. I am just going to leave it at that."

The Los Angeles Lakers beat the Cleveland Cavaliers 100-86, despite LeBron James missing his fourth match in a row with an ankle problem.

Full list of NBA resultsThe Surrogates: The very real highs and lows of having someone else carry your babyObsessed with Louis Theroux?: Binge your way through a selection of his documentaries this weekend
Source