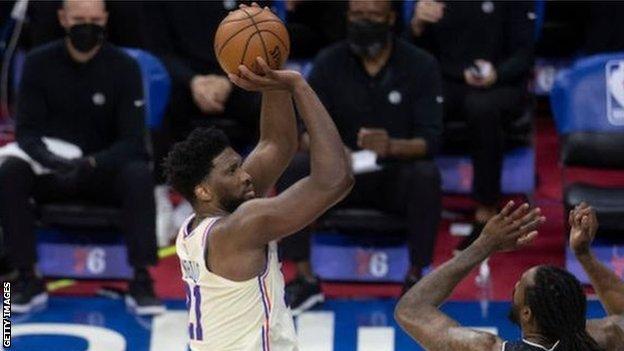 Embiid helped the 76ers to their fourth straight win

The 76ers extended their lead at the top of the Eastern Conference while defeat ended the Clippers' seven-game winning streak.

Embiid became the first 76ers player since 2006 to score more than 35 points in three consecutive games.

"I don't think teams really know what to do when guarding him."

Western Conference leaders the Utah Jazz beat the Indiana Pacers 119-111 but lost two-time All Star Donovan Mitchell in the third quarter as he limped off with a sprained right ankle.

Advertisement
Advertisement
with 22 seconds remaining as they came from behind to beat the San Antonio Spurs 107-106.

There was a narrow win for the Washington Wizards as Russell Westbrook scored two free throws with one second left in overtime to clinch a 117-115 result over the New Orleans Pelicans.

Julius Randle matched his season high of 44 points to lead the New York Knicks to a 117-109 win over the Dallas Mavericks, while Nikola Jokic made his 50th double-double of the season in the Denver Nuggets' 128-99 win over the Houston Rockets.

The Brooklyn Nets – second in the Eastern Conference – eased past the Charlotte Hornets 130-115 with Joe Harris and Kevin Durant scoring 26 and 25 points respectively.

There were wins too for the Detroit Pistons, Toronto Raptors, Memphis Grizzlies and Minnesota Timberwolves.