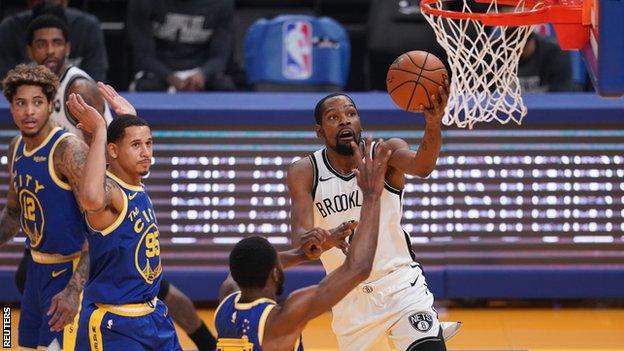 Durant won back-to-back championships during his time with the Warriors in 2017 and 2018, and was named as the Finals MVP on both occasions

The two-time NBA champion was returning after missing the past three games while in quarantine.

"I loved my time here, I loved playing for this team, but I'm glad we got a good W," said Durant.

The forward spent three seasons as a member of the Warriors before leaving in 2019.

Durant won titles with the Warriors in 2017 and 2018, earning NBA Finals MVP honours each year before suffering a torn Achilles tendon in the 2019 championship series and then departing for the Nets.

Kyrie Irving paced the Nets with 23 points, and James Harden provided a game-high 16 assists and 19 points, helping Brooklyn complete a dominant win in the new arena in San Francisco that the Warriors moved into last season.

Elsewhere, Western Conference leaders the Utah Jazz claimed their seventh victory in a row with a 112-94 win over the Miami Heat.

And the Indiana Pacers overcame the Atlanta Hawks 125-113 with Aaron Holiday coming off the bench to score a season-high 18 points and help the Pacers come back from a nine-point fourth-quarter deficit.