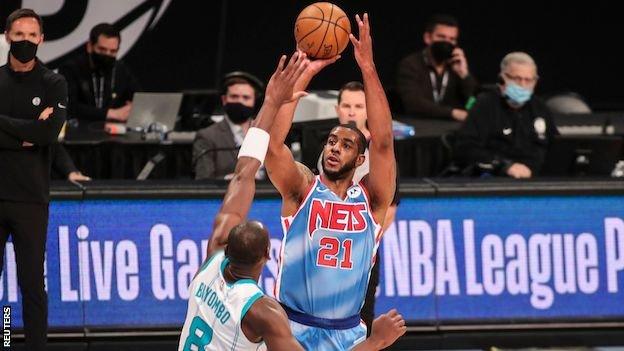 The Brooklyn Nets further cemented their move to the top of the Eastern Conference with a 111-89 win over the Charlotte Hornets.

Jeff Green top-scored for the Nets, who have won 20 of their past 23 games.

Elsewhere, Stephen Curry made 36 points and 11 rebounds in the Golden State Warriors' defeat by the Miami Heat.

The Philadelphia 76ers – now second in the Eastern Conference behind the Nets – beat the Cleveland Cavaliers 114-94, while Jamal Murray's 23 points helped the Denver Nuggets

Josh Jackson scored a season-high 31 points in the Detroit Pistons' 120-91 victory over the Washington Wizards, as the Orlando Magic edged a narrow 115-110 win over the injury-hit New Orleans Pelicans in overtime.

Two overtimes were needed to separate the San Antonio Spurs and the Atlanta Hawks, with the Hawks eventually winning 134-129 with Trae Young scoring 15 points after the end of normal time.