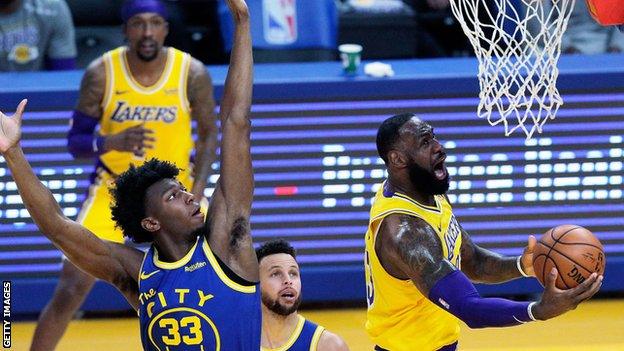 LeBron James helped the Lakers win the 2020 NBA Finals, after the Warriors won three of the previous five titles

LeBron James recorded the 98th triple-double of his career as the Los Angeles Lakers eased to a 128-97 win over the Golden State Warriors in San Francisco.

Montrezl Harrell scored 15 of his team-high 27 points as the Lakers pulled away in the second quarter to win the season series with the Warriors 2-1.

The team that won the last six series between the division rivals went on to reach the NBA Finals, winning four.

James had 22 points and is fifth on the NBA's all-time list for triple-doubles.

Stephen Curry scored 27 points to lead the Warriors, who were coming off an impressive home win over the Utah Jazz a day earlier but suffered their fifth loss in six games.

The Lakers (26-13) are narrowly behind the Phoenix Suns near the top of the Pacific division while the Warriors are 20-20 and the Jazz have the NBA's best record of 28-10. 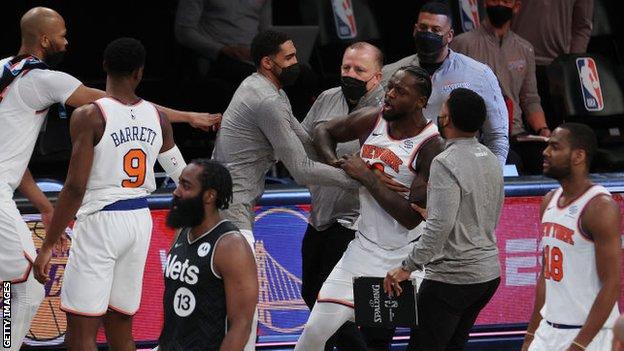 Kyrie Irving scored 34 points and James Harden posted his sixth triple-double in 14 games as the Brooklyn Nets held on for a 117-112 win over the New York Knicks.

Irving scored nine points in the fourth quarter as the Nets (27-13) finally put away their local rivals, who trailed by 18 just before the half.

The Knicks got the lead down to 115-112 with 10.6 seconds remaining on a dunk by Julius Randle, who finished with 33 points.

Randle then won the ball back but was called for traveling on a pump fake with 3.2 seconds left and Harden finished off the Nets' 13th win in 14 games.

Randle questioned the official who made the call and, after the game, had to be restrained before throwing a chair as he headed to the locker room.

Elsewhere on Monday, Giannis Antetokounmpo recorded his third consecutive triple-double as the Milwaukee Bucks held off a second-half surge to win 133-122 at the Washington Wizards.

The NBA's two-time reigning Most Valuable Player, who was also MVP in the All-Star Game on 7 March, finished with 31 points, 15 rebounds and 10 assists as the Bucks improved to 25-14.

Click here to see all of Monday's NBA results