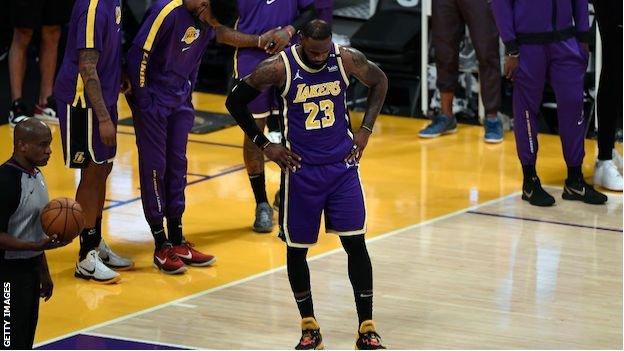 LeBron James returned from injury after 20 games out but could not prevent his Los Angeles Lakers from slipping to a 110-106 defeat by the Sacramento Kings.

James had been sidelined since 20 March after spraining his ankle – the longest absence of his 18-year NBA career.

The 36-year-old scored 16 points and added eight rebounds and seven assists, but defeat marked the Lakers' fifth loss in their past six games.

It was the Kings' first win over the Lakers at Staples Center since 2018.

Tyrese Haliburton, who led the Kings with 23 points and 10 assists, sank two free throws inside the last 2.7 seconds to seal the win after James saw a long three-point effort bounce back off the rim.

Elsewhere, the Phoenix Suns usurped the Utah Jazz at the top of the Western Conference with a 121-100 win, while Eastern Conference leaders the Brooklyn Nets were beaten 128-109 by the Portland Trail Blazers.

The Philadelphia 76ers defeated the Atlanta Hawks 126-104, while the Milwaukee Bucks won 108-98 at the Chicago Bulls.

There were wins too for the Washington Wizards, the Boston Celtics and the Memphis Grizzlies.