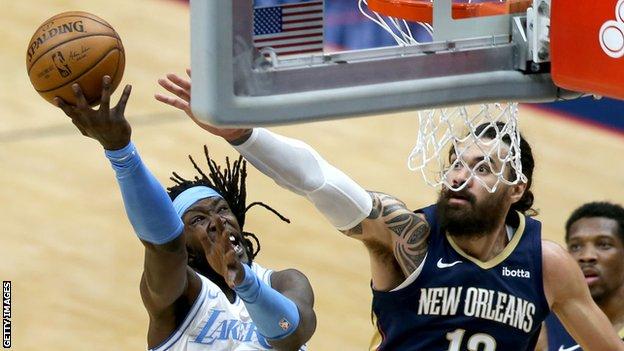 The Los Angeles Lakers lost a third straight game as they continue to face a "challenge" in the absence of injured stars LeBron James and Anthony Davis.

The Lakers were beaten 128-111 by the New Orleans Pelicans in their second game since announcing James will be out "indefinitely" after injuring an ankle.

The Lakers, who have been without Davis since 14 February, drop to fourth in the Western conference.

"It's a challenge but it's not nothing that we can't overcome," said Lakers forward Kyle Kuzma.

"We've just got to look at the drawing board, continue to trust each other, try to play for one another on both sides of the ball."

Those comments were echoed by head coach Frank Vogel, who says he still expects his side to win games despite their key absences.

"My expectation is we're going to win games with this group, and I believe in the group that we have," Vogel said.

"If nothing happens [by the trade deadline on 25 March], we'll figure out a way to win games during this stretch, and it will benefit us in the long run."

Harden was a late inclusion after suffering with neck soreness against the Washington Wizards on Sunday, but he finished with 25 points and 17 assists.

The Philadelphia 76ers left it until late against the Golden State Warriors, but two late baskets from Tobias Harris helped the hosts to a 108-98 victory.