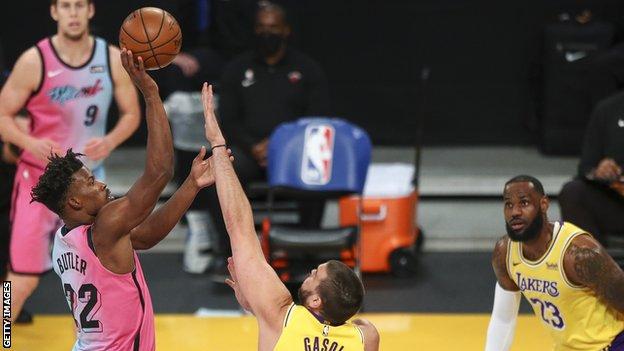 The Miami Heat beat the Los Angeles Lakers 96-94 in a rematch of last season's NBA Finals.

The Lakers claimed a 4-2 series win to take the title last October.

But in the first meeting between the sides this season, Kendrick Nunn scored 27 points and Jimmy Butler had 24 points and eight rebounds for the visitors in Los Angeles.

"You can tell that the chemistry is building," said Nunn, who hit five three-pointers.

"We've been together for a week and a half, and it just gives us more of a feel for each other."

Both teams struggled in the fourth quarter, combining for just 32 points, but two free throws by Butler with 12.4 seconds left were the difference.

Elsewhere, Stephen Curry missed out on his homecoming as the Golden State Warriors

Advertisement
lost 102-100 at the Charlotte Hornets.

Curry, who missed playing in his home town last season with a broken hand, warmed up but returned to the locker room before the start of the game feeling unwell.

There was more drama at the end of the game as Golden State's Draymond Green was given two technical fouls and ejected from the game with 9.3 seconds remaining and his side 100-98 ahead.

It allowed Terry Rozier to first level the game with the resulting two free throws and then score a winning jump-shot on the buzzer to give his side the victory.