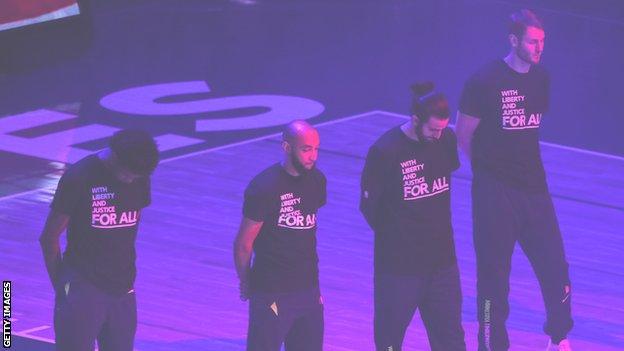 Minnesota Timberwolves and Brooklyn Nets players wore T-shirts calling for "liberty and justice for all" following the fatal shooting of a black man by a police officer on Sunday.

The death of Daunte Wright, 20, in Brooklyn Center sparked days of angry protests and an overnight curfew.

Tributes were paid at Tuesday's NBA game in nearby Minneapolis, which had been postponed for 24 hours.

There was a moments silence before the Nets beat Minnesota 127-97.

Before the game, the club tweeted: "We have a basketball game today. We will not be posting our usual content. Justice for Daunte Wright."

Local police say Wright was shot after the officer meant to use a Taser, but mistakenly drew her gun instead.

Wright was pulled over for a traffic violation, but there was a struggle when he tried to get back into the car.

Tensions were already high in nearby Minneapolis as the trial of an ex-officer accused of killing George Floyd continues.

"It's sickening, it's sad, it's disgusting and it has to stop," Okogie said.

"We have to hold people accountable. We need to keep having this conversation.

Kevin Durant, who helped the Nets to victory with 31 points, said he was "glad" the NBA pressed ahead with the game in highly-charged circumstances.

"I think guys are obviously aware of what's going on in our country, we have conversations about this all the time," Durant said.