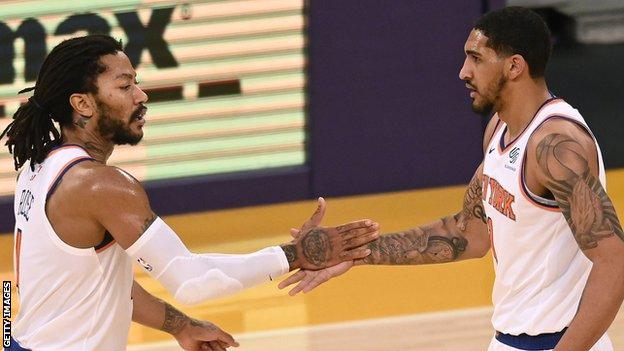 The New York Knicks are assured a spot in the Eastern Conference play-offs for the first time in eight years after the Cleveland Cavaliers beat the Boston Celtics 102-94 on Thursday.

Boston's defeat sealed a top-six finish for the Knicks, while the Celtics are likely to have to come through the new play-in tournament, for sides placed seventh to 10th, to seal their place in the play-offs.

The Atlanta Hawks also sealed a post-season return after a five-year absence.

They overcame the Washington Wizards 120-116 in a game that had play-off implications for both sides.

John Collins' three-pointer with 24.8secs remaining helped Atlanta secure the crucial comeback win that saw them move a half-game ahead of Miami and New York in their battle for fourth spot in the Eastern Conference, and home-court advantage in the first round.

The loss means the Wizards will miss out on the East play-in tournament, keeping Chicago's hopes alive.

Meanwhile, Kyle Kuzma ensured the Los Angeles Lakersremain in contention for direct entry to the play-offs.

His layup with 6.9ecs left earned them a 124-122 victory over the Houston Rockets, which leaves the seventh-placed Lakers a game behind Dallas and Portland.

Elsewhere, James Harden scored 18 points, contributed 11 assists and came up with seven rebounds on his return from a hamstring injury as the Brooklyn Nets beat the San Antonio Spurs 128-116.

'I stole £70,000 to feed my addiction': Meet the young gamblers struggling to overcome betting's mental gripThe Joe Wicks Podcast is back: He talks to Sir Mo Farah about choosing a positive route in life
Source