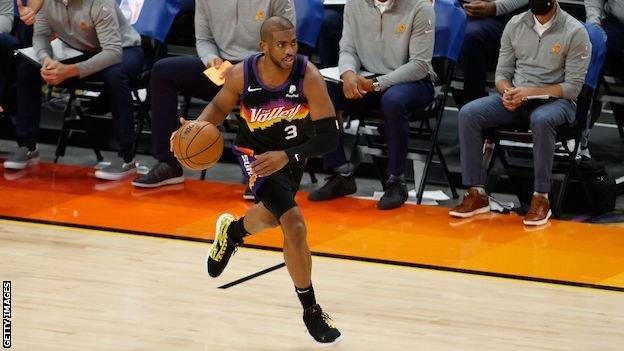 The Phoenix Suns reached the NBA play-offs for the first time in 11 years with a 109-101 victory over the Los Angeles Clippers.

Chris Paul scored 28 points, 15 of which came in the fourth quarter, to lead the Suns to their first win over the Clippers this season.

The Suns are second in the Western Conference, with the Clippers third.

Having last reached the play-offs in 2009-10, the Suns end the NBA's second-longest active play-off drought.

The Sacramento Kings – currently 12th in the Western Conference – have the longest drought, last reaching the play-offs in 2005-06.

"Where we were just last year, a couple years ago, to get to this point now, it shows all the work we've put in over that course of time, and how important everybody in the organisation, from top to bottom, has been. It's honestly a really big lesson to be a part of it," said Suns forward Cameron Johnson.

"When I first got here, everybody was like, 'Oh, the Suns are down. They haven't made the play-offs in 'X' amount of years.' To be so close last year and to be in a position to clinch a spot now, it's a blessing and I don't take it for granted at all."

Advertisement
Advertisement
set a franchise record for most points in a game in their 154-105 win over the Sacramento Kings.

The Philadelphia 76ers also clinched a play-off spot with a 127-83 thrashing of the Atlanta Hawks.

The struggling Los Angeles Lakers were beaten 116-107 by the Washington Wizards, who had Bradley Beal score a team-high 27 points and Russell Westbrook record a triple-double of 18 points, 18 rebounds and 14 assists.

The New York Knicks dominated the fourth quarter to pull away to a 113-94 win over the Chicago Bulls, while the Boston Celtics beat the Charlotte Hornets 120-111.

The Orlando Magic won for just the second time in 14 games as they held off a rally by the Cleveland Cavaliers to win 109-104, and the Denver Nuggets edged a 114-112 win over the New Orleans Pelicans.

The Miami Heat beat the San Antonio Spurs 116-111, while the Portland Trail Blazers eased past the Memphis Grizzlies 130-109.

Full NBA resultsSnooker-tastic!: The heroes and villains that helped snooker reach its glory yearsHave an evening in with films on iPlayer: From action to romance, there's a movie for everyone
Source