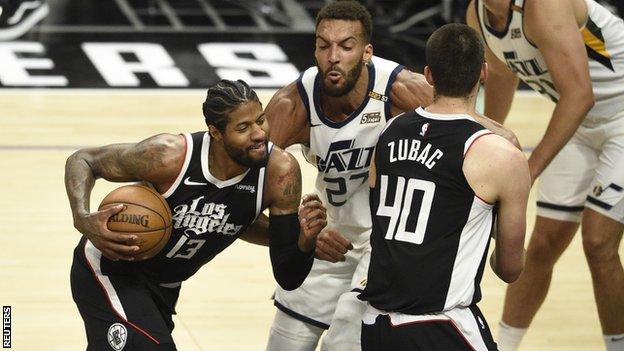 George scored 20 points in the first half of the game

Kawhi Leonard and Paul George combined for 65 points as the Los Angeles Clippers beat the Utah Jazz to give themselves hope in the NBA play-offs.

The Clippers were under pressure, having lost the opening two games of the Western Conference semi-finals series.

But they recovered for a 132-106 home win with game four to come on Monday.

"I need my two best players to be able to do that," said Clippers head coach Tyronn Lue.

"They set the table for everyone else."

Leonard finished with 34 points and 12 assists and George had 31 against the top-seeded team, who finished the regular season with 52 wins.

The Jazz were without guard Mike Conley, who sat out his third game in a row with a sore hamstring while Donovan Mitchell scored 30 points but missed the final seven minutes after turning his right ankle.

But the 24-year-old expects to be fit to return on Monday.

Are the Paralympics unfair?: An investigation in the games classification systemKrept and Konan: Exploring Englishness in creating the Euro 2020 anthem
Source