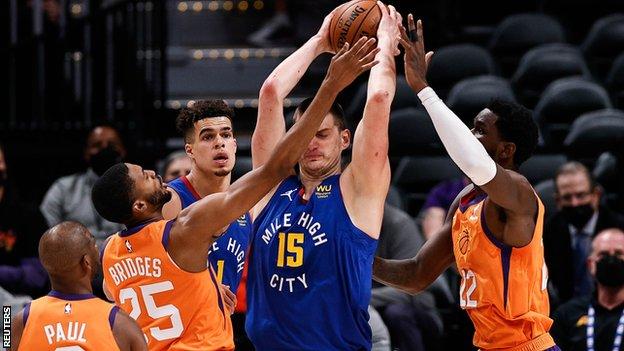 Jokic found himself under pressure against the Suns

The Phoenix Suns moved closer to the NBA's Western Conference final after going 3-0 up on the Denver Nuggets in their semi-final series.

The Suns have won six consecutive play-off games and are one victory from reaching the conference final for the first time since 2009-10.

Elsewhere the Philadelphia 76ers moved 2-1 ahead in their Eastern Conference semi-final series.

Joel Embiid had 27 points, nine rebounds and eight assists as the visitors beat the Atlanta Hawks 127-111.

The Suns started strongly against the Nuggets in their game and were 21-8 ahead early on and 37-27 up after the first quarter.

The Nuggets brought it back to trail 59-55 at the break but their opponents dominated after that and will aim to secure a clean sweep in the series in Denver on Sunday.

Nikola Jokic had 32 points, 20 rebounds and 10 assists for the Nuggets on the night he received his NBA Most Valuable Player award.

In Atlanta, the 76ers put in a strong third-quarter performance to end the host's 13-game home winning streak.

Embiid and team-mate Ben Simmons each scored 11 points as they outscored the Hawks 34-19 ahead of the final quarter.

Tobias Harris' 22 points saw him hit the 20-point mark for the sixth straight game while Simmons finished with 18 points and seven assists.

Game four is on Monday in Atlanta.