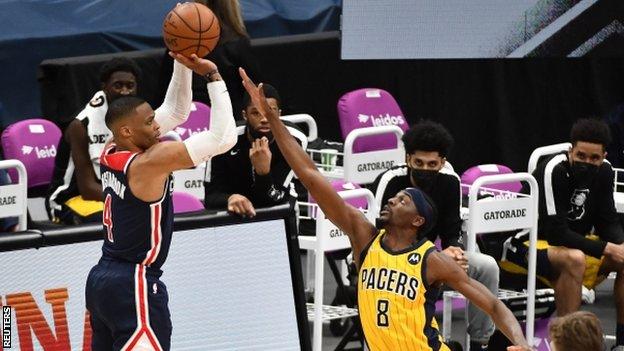 Westbrook's triple-double was the 162nd of his career

Russell Westbrook made an historic triple-double to power the Washington Wizards to a 132-124 victory over the Indiana Pacers on Monday.

A triple-double is achieved when a player makes double-digit totals in three statistical categories.

Only Magic Johnson and Oscar Robertson had previously achieved the feat with 30 points, 10 rebounds and 20 assists.

"I take pride as a leader in making my team-mates better," said Westbrook, who now has a record 16 triple-doubles for the Wizards in only 38 games.

The Brooklyn Nets' James Harden also made a triple-double on Monday as his side beat the Minnesota Timberwolves 112-107.

He scored 38 points, passed for 13 assists and pulled down 11 rebounds while Kyrie Irving added 27 points on his return after a three-game absence.

Western Conference leaders the Utah Jazz moved to 35-11 for the season by thrashing the Cleveland Cavaliers 114-75.

The Los Angeles Clippers extended their winning run to six games by the beating Milwaukee Bucks 129-105.