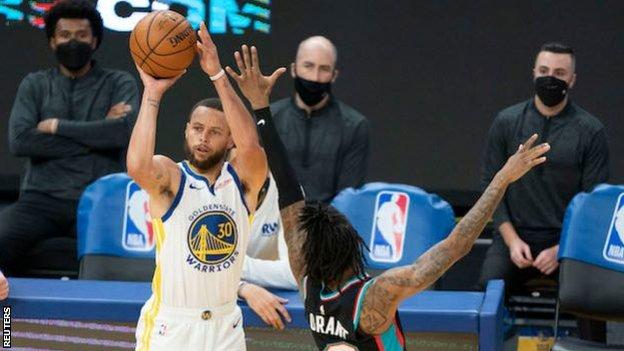 Stephen Curry secured his second NBA scoring title with a game-high 46 points in the Golden State Warriors' 113-101 win over the Memphis Grizzlies.

Curry finished the regular season with a 32.0-point scoring average, taking top spot ahead of the Washington Wizards' Bradley Beal who finished on 31.3 points per game.

Curry, 33, joins Michael Jordan as the only NBA players to win a scoring title after turning 33.

"I had a lot of good looks all night," Curry said. "We were in sync. The guys set great screens for me."

In winning their sixth straight game, the Warriors claimed the number eight position in this week's play-in tournament.

The play-in tournament has been introduced on a one-year basis for the 2020-21 season, and will determine who takes the seventh and eighth seeded positions in each conference for the play-offs.

In the Western Conference, the Warriors will play the Los Angeles Lakers, while the San Antonio Spurs face the Grizzlies.

In the Eastern Conference, the Washington Wizards take on the Boston Celtics, and the Charlotte Hornets play the Indiana Pacers.

The NBA play-in tournament starts on Tuesday, while the play-offs start on 22 May.

The Joe Wicks Podcast is back: He talks to Sir Mo Farah about choosing a positive route in lifeLooking for a new phone?: BBC Scotland look at the research you should do before you trade up
Source