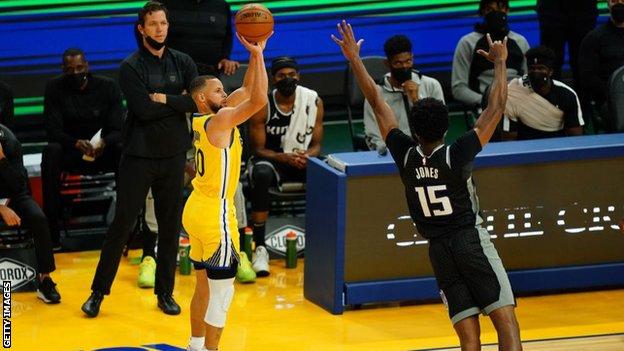 Stephen Curry finished with 37 points for the Warriors

Stephen Curry broke the NBA record for the most three-pointers made in a month as Golden State Warriors beat the Sacramento Kings 117-113 on Sunday.

Curry, who finished with 37 points, hit seven three-pointers to take his total to 85 with two games to play in April.

The previous record of 82 was set by James Harden while playing for the Houston Rockets in November 2019.

Curry enjoyed his 30th 30-point game of the season and has hit at least that target in 13 of his past 14 games.

"It seems like I've run out of ways to describe Steph's play," said Warriors coach Steve Kerr. "The shot-making is just unbelievable and mind-boggling."

A second successive win pushed Golden State's record to 31-30 this season as they chase a play-off spot in the Western Conference.

Meanwhile, Kevin Durant scored 33 points on his return from a three-game absence with a thigh injury for the Brooklyn Nets during a 128-119 victory over the visiting Phoenix Suns.

Kyrie Irving had 34 points with 12 assists and Blake Griffin scored 16 points as the Nets held on to their place at the top of the Eastern Conference.

Devin Booker scored 36 points for Phoenix, who are second in the Western Conference despite successive defeats, while Deandre Ayton scored 20 points with 13 rebounds.

Atlanta Hawks earned an important 111-104 victory over the Milwaukee Bucks, while the Memphis Grizzlies held off a late rally to beat the Portland Trail Blazers 120-113.

Charlotte Hornets beat Boston Celtics 125-104 thanks to Devonte Graham's 24-point performance, to move within two games of the Celtics for the sixth spot in the East.

Elsewhere, Washington Wizards and Indiana Pacers both kept their play-off hopes alive with respective wins over the Cleveland Cavaliers and Orlando Magic.