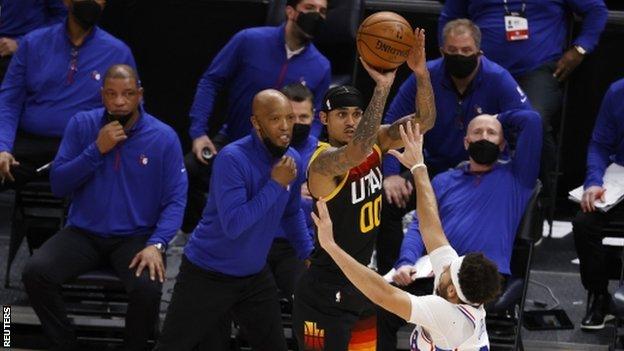 The Utah Jazz beat the Philadelphia 76ers 134-123 in a battle between the NBA's two conference leaders on Monday.

Jordan Clarkson came off the bench to score 40 points in Salt Lake City as the Jazz claimed their eighth straight win – and 19th in 20 games.

The Western Conference leaders now have an NBA-leading record of 23-5.

The Sixers (18-10) made it competitive thanks to a near-triple-double display by Ben Simmons, who had 42 points, 12 assists and nine rebounds.

Kyrie Irving scored a season-high 40 points as the Brooklyn Nets set a franchise record with 27 three-pointers in a 136-125 win at the Sacramento Kings.

Irving made nine shots from behind the arc and James Harden six, contributing to his tally of 29 points, 14 assists and 13 rebounds.

Brooklyn were without Kevin Durant because of a hamstring injury but now have a 17-12 record after their third straight win.

Stephen Curry scored a game-high 36 points in 30 minutes as the Golden State Warriors claimed a 129-98 victory over the Cleveland Cavaliers in San Francisco.

The two sides contested the NBA Finals four years in a row from 2015-18, with Curry helping Golden State become champions three times, but the Warriors gradually pulled away from the road-weary Cavs, who slipped to 10-19 after playing the second night of a back-to-back.

Grounded with Louis Theroux: The top ten unexpected revelations from his incredible guestsHow to Avoid a Climate Disaster: Listen as Bill Gates outlines his plan to save the earth
Source