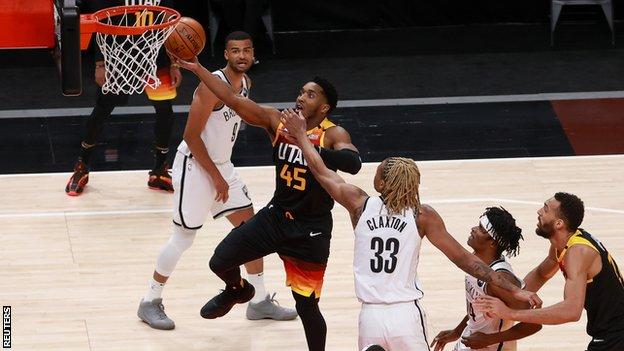 Donovan Mitchell top scored for Utah with 27 points in the 118-88 victory.

The Nets struggled without Irving, who was out for personal reasons, and injured pair Harden and Durant.

Alize Johnson, who joined Brooklyn on 10-day contract on Monday, led for the Nets with 23 points and 15 rebounds.

Meanwhile, the Milwaukee Bucks held on to beat the Boston Celtics 121-119 to extended their winning run to eight games.

The Bucks led by as many as 25 points in the third quarter but prevailed only after a three-point attempt by Boston centre Daniel Theis failed to drop as time expired.

"They made shots, we slowed down, missed some good looks," said Milwaukee's Khris Middleton, who scored 27 points and pulled down 13 rebounds,

"Credit them, they hung in the game, found a way to get back in it and had a chance to win at the end."

Milwaukee's two-time NBA Most Valuable Player Giannis Antetokounmpo had a quiet night of 13 points, eight rebounds and seven assists as he returned after resting his sprained left knee.

Elsewhere, Orlando Magic guard Evan Fournier came up with a the game-winning lay-up with 6.4 seconds remaining as they overcame the Phoenix Suns 112-111.

Magic centre Nikola Vucevic put up 27 points and 14 rebounds in what was his 30th double-double of the season.

The Toronto Raptors ended their nine-game losing streak with a 135-111 victory over the Denver Nuggets.

Guard Kyle Lowry, a championship winner with the Raptors in 2019, said it was a "weird" victory as reports circulated about an imminent trade.