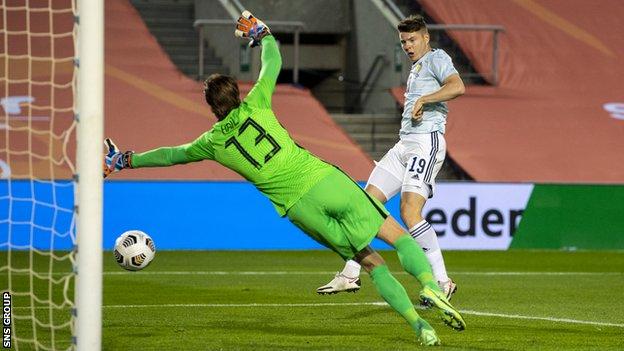 Depleted Scotland continued their Euro 2020 preparations in positive fashion, despite Memphis Depay's late free-kick denying them victory over the Netherlands in Portugal.

Shorn of seven players due to Covid-19 precautions, Steve Clarke's side defied any early concerns when Jack Hendry drilled in to cap a fine start.

Depay swept home a composed first-time shot to level, then arced in a stunning set piece in the final moments after substitute Kevin Nisbet scored with his first touch to restore Scotland's lead.

Clarke's side had looked set for a confidence-boosting victory in the absence of John Fleck, who returned a positive Covid test, and David Marshall, Stephen O'Donnell, Nathan Patterson, Grant Hanley, John McGinn and Che Adams, who were left at the training camp in Spain as a precaution.

But instead they move on to Sunday's friendly with Luxembourg after a 2-2 draw in the Algarve.

Six Scottish players will return to trainingReaction & as it happened

Scotland had chances to extend their lead just after the opener, as Lyndon Dykes and Kieran Tierney – a constant threat despite playing as the left centre-back in a three-man defence – both went close.

And debutant David Turnbull was inches away from curling in a third goal moments after Nisbet had turned in Andy Robertson's pinpoint cross following a sweeping counter attack.

Hendry's opener was also a sign of Scotland's adventure, as the centre-back found himself in space on the edge of the box to fire in his first international goal after good pressure high up the pitch which resulted in Stuart Armstrong winning possession.

Just as impressive was Scotland's discipline off the ball as they restricted the Dutch to very few clear chances throughout the 90 minutes.

However, Depay's first equaliser was a glimpse of their capabilities as Georginio Wijnaldum peeled away from Hendry to head the ball into the Lyon forward's path, and his crisp finish left goalkeeper Craig Gordon with little chance.

Wijnaldum and Barcelona midfielder Frenkie De Jong were brought off after half an hour by Dutch manager Frank De Boer, presumably as part of a pre-match plan.

It clearly hampered their fluency in midfield, as despite plenty of tidy possession there was little incision in attack as Scotland defended their box relatively comfortably.

But when they gave away a disputed free-kick on the edge of their own penalty area, the in-form Depay took advantage in ruthless fashion to snatch a draw for his team.

Man of the match – Kieran Tierney 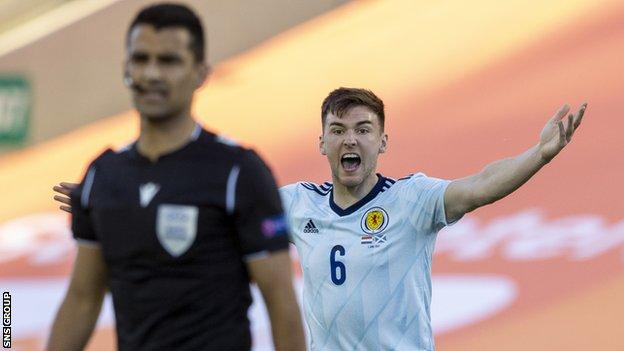 Scotland's left centre-back surged up and down the pitch like a winger, and was a regular threat

What did we learn?

Fleck's positive Covid test and the precautionary withdrawal of six others had cast a worrying shadow over Scotland's build-up, but this performance has blown that away.

There were so many positives for Clarke. The attacking play was more fluid than in recent matches, perfectly illustrated by the threat from their centre-backs in open play. And the side's ability to press the Dutch high up the pitch at times was an indication that Scotland will not just camp in their own box come the Euros in a fortnight.

Debutants Turnbull and Nisbet both showed they can play a significant part, the former mostly coping well with unfamiliar defensive duties while growing in confidence on the ball. Billy Gilmour's cameo at the end was also welcome.

Clarke hinted that the injuries to Ryan Jack and Kenny McLean may force him to change his approach. If this was a glimpse of that, the Tartan Army can look forward to the opening match with the Czech Republic with an unfamiliar confidence.

The Dutch, meanwhile, are still working their way back from a surprise seven-year hiatus from major tournaments, and showed little sign they will be a threat in the latter stages.

Having said that, friendlies can deceive, and key players Wijnaldum and De Jong only played 30 minutes. After a fine season with Lyon and on this showing, Depay could well light up the tournament with his individual brilliance.

'I want to have sleepless nights' – reaction

Scotland head coach Steve Clarke: "We'd have liked to have won the game. We feel like the referee took it away from us with a soft free-kick. We can overlook that. The performance was good.

"Good performances from all the players tonight gives me more problems or decisions as the head coach. That's what we want. I want to have difficult decisions. I want to have sleepless nights."

Scotland ended a run of four straight defeats against Netherlands, and their two goals were as many as they had scored in their previous 11 meetings with the Dutch.Clarke's side have drawn three of their last four matches (W1), having only drawn three of their previous 29 in all competitions (W12 D3 L14).Scotland have won just one of their last 11 friendlies (D2 L8), winning none of their last five (D1 L4).Depay has been directly involved in 29 goals in his last 25 appearances for his country (16 goals, 13 assists).Hendry scored his first goal for Scotland in his sixth cap, and Nisbet netted his in his second appearance

Scotland travel to face an improving Luxembourg side on their own patch on Sunday (17:00 BST), while the Netherlands play Georgia at the same time.