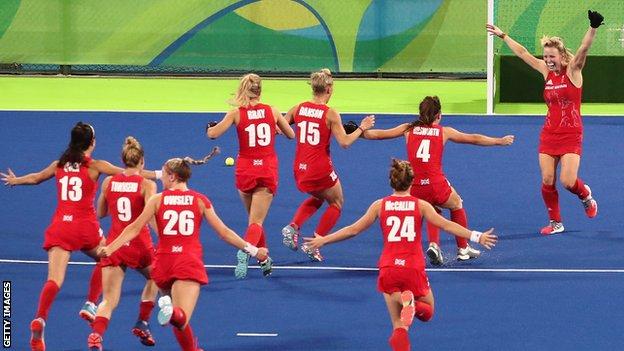 The three-year deal with Vitality, a health and lifestyle insurance company, has been described as a "landmark" move by hockey bosses.

The money the firm is paying has not been disclosed, but is said to be "a significant figure".

It provides a huge boost to the sport in what is set to be an Olympic year.

Great Britain's women will look to defend their Olympic title at the rescheduled Tokyo Games, which start on 23 July.

"This announcement is fantastic news for the game of hockey and for women's sport," said Danson-Bennett, who is taking up a 'Performance Champion' role with the company.

"I am delighted to be joining an organisation that seeks to raise the profile of women's sport, and I'm sure this partnership will see many more people get involved in the game, become more active and live healthier lifestyles."

The deal will see the company logo on the shirts of the England and GB women's teams, while there will also be support for the FIH Pro League, including both men's and women's matches, and for the English Women's Hockey League.