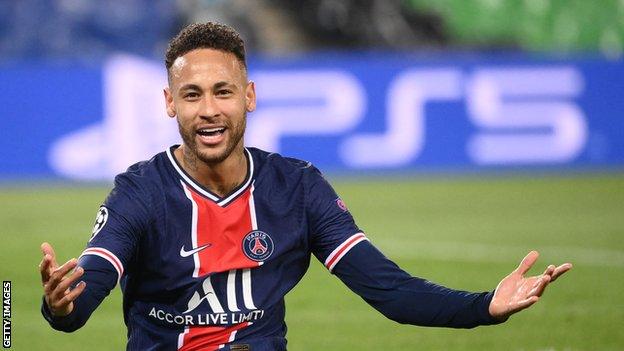 Is there a modern, top-level footballer as revered and reviled in such equal measure as Neymar?

The forward is one of the most talented players of his generation, an icon in his native Brazil and the most expensive player in football history.

He is also, in the eyes of some, a preening prima donna and serial diver.

Something surely everyone can agree on is that even after an injury-affected campaign for Paris St-Germain he represents a huge threat to Manchester City's hopes of a maiden Champions League title.

The two sides meet in Paris on Wednesday for the semi-final first leg and BBC Sport has spoken to prominent football journalists Guillem Balague and Julian Laurens to get the latest on the ever-evolving perception of one of football's highest-profile stars.

PSG-Bayern: A landmark moment for Pochettino – but the end for Flick?PSG reach last four with away-goals winMauricio Pochettino: How is Argentine getting on with PSG's superstars?

'Neymar did so many magical things'

Ankle and thigh injuries have limited Neymar's involvement for PSG this campaign, with the 29-year-old forward making 24 appearances in all competitions.

However, he has still managed to contribute significantly, scoring 14 goals and providing nine assists.

Worryingly for City, he is showing signs of hitting peak form and fitness at just the right time to help his club's push for trophies.

Arguably his best two games of the campaign came in this month's Champions League quarter-final, which saw PSG knock out Bayern Munich, the side who beat them in last season's final.

The Brazilian was superb in both legs. He provided two assists in the 3-2 win in Germany and would have had more in Paris, along with a couple of goals, were it not for the woodwork and a superb display from Bayern goalkeeper Manuel Neuer.

More than that, though, was the work ethic and manner in which he belied his reputation as a high-functioning individual to operate as part of an effective team display.

"We are in a time where players are expected to be robots. But you don't get that with Neymar. 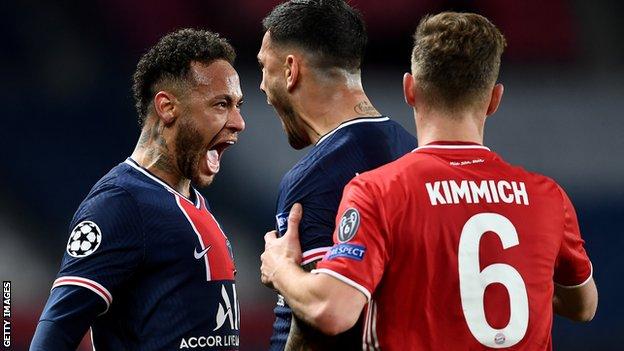 'The perception of PSG is changing'

Like their opponents on Wednesday, PSG are still seeking their first Champions League title despite a lavish outlay on players since being taken over in 2011 by Middle Eastern investors, Qatar Sports Investments.

Their money-assisted ascent to French dominance and regular Champions League football did not sit well with some.

But their run to last year's final, coupled with playing attractive, attacking football, and the appointment this season of frmer Tottenham manager Mauricio Pochettino has perhaps taken the edge off some of the sharpest criticism against both the club and their highest profile player.

PSG, and those associated with the club, have certainly benefited from events in the last 11 days surrounding the European Super League.

The French club's refusal of an invite to join the breakaway competition has boosted their image for many fans, in sharp contrast to their 12 European peers, who combined to devise it.

"There was a perception about all the money coming over from the Qatari ownership since taking over and we know big, traditional clubs like Bayern, Juventus and Real Madrid are against PSG and Man City," said French football writer Julian Laurens.

"There was always the debate about old money and new money.

"But I do think if you watch Kylian Mbappe and Neymar play, especially the Neymar from those two games against Bayern, you see the team spirit, the fighting spirit that they have.

"Pochettino is a very likeable coach as well. That has helped too.

"As well as trying to cement their status and belong there with the top, top clubs, maybe PSG are being liked a bit more and people enjoy watching them. They are so entertaining.

"Within the club they have a feeling the perception of them is changing outside of Paris and France even." 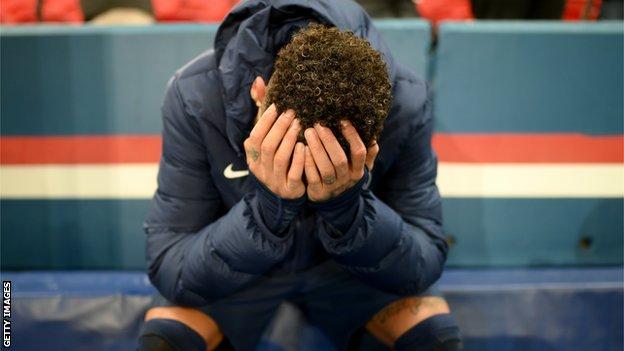 Despite scoring 84 goals in 109 appearances since joining PSG, Neymar continues to be criticised for some of his actions on the pitch

There will always be Neymar detractors, especially for a player perceived as a lightning rod for what many see as the on-field ills of the game.

Balague feels such animosity towards the South American is born out of a believed moral superiority within football fans on this continent.

"You can hear the voices saying 'no we don't like PSG and we particularly don't like Neymar'," adds Balague. "This despite the fact he was brilliant and in my eyes produced the best individual performance of the season in the first 45 minutes against Bayern.

"He was absolutely brilliant and yet I put that out on Twitter and I got more answers saying 'yeah, but he dived, he did this, he did that'.

"A lot of it comes from the Anglo Saxon world, I think. It is northern European sanctimony.

"That feeling of anger is more powerful than the magic someone like Neymar produces on the pitch. Yes, you can be upset by what some people do on the pitch, but no-one is perfect and Neymar is not perfect either.

"But when he gets the ball, he does things that only Lionel Messi can do. Let him be what he wants to be, he is Brazilian. Part of what he does is to be on stage and give us a show. He is doing that."

And what of the most ignoble of crimes for which Neymar is so regularly admonished – diving?

"It is more accepted in certain countries. Some people might say 'I don't care if he rolls around on the pitch' because the performances and what they do on the pitch are out of this world.

"I don't think you can change them and they shouldn't feel they have to change."

Snooker-tastic!: The heroes and villains that helped snooker reach it's glory yearsHave an evening in with films on iPlayer: From action to romance, there's a movie for everyone
Source