The mock drafts are done, the scouting reports are in, the speculation is over – it's time for the 2021 NFL draft.

It's the moment dozens of young American football players discover whether their dreams will come true, whether they'll make it to the NFL, and fans find out which of the leading players coming out of college will be joining their team.

Because of the coronavirus pandemic, last year's event was fully virtual, but now some traditional features are back. Live events will be held in Cleveland, with some of the top draft picks taking the stage when selected – and NFL commissioner Roger Goodell will be able to give out his trademark bear hugs.

The first round of the three-day event begins on Thursday (01:00 BST, Friday), and as many as five quarterbacks could go in this year's first 10 picks. Here's a look at 10 of the top prospects.

What's it like to go through the NFL draft? 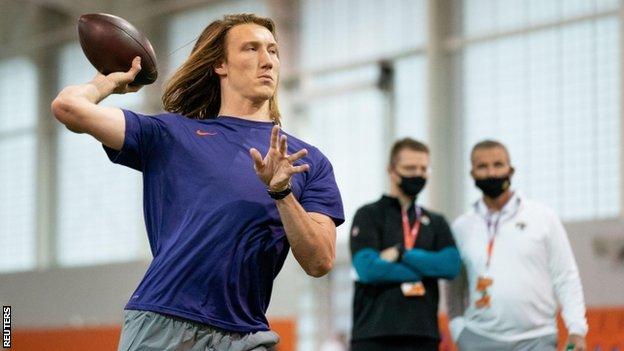 Considered the best quarterback of his generation and the biggest 'can't-miss' prospect since Andrew Luck (2012). Has been the country's top-ranked quarterback since high school, where he won two state championships. Added a national championship with Clemson en route to a remarkable record of 86-4 in high school and College. Now 6ft 6in, seen as the most complete quarterback in this draft and primed to spearhead the Jacksonville Jaguars' rebuild.

The New York Jets need a quarterback after trading Sam Darnold and Wilson is the most dynamic available. A Mormon with Hawaiian ancestry, he played at Brigham Young University and shared the Polynesian College Player of the Year award after throwing 33 touchdowns in 2020. Elusive with the ability to throw on the run and off his back foot, meaning he has an eye-catching highlights reel and has been compared to Patrick Mahomes.

Featured on season two of TV documentary QB1: Beyond The Lights, which showed the expectation building on Fields in his final year at high school, when he chose to play College football at Georgia. After a year as back-up, transferred to Ohio State and was a finalist for the Heisman Trophy (best College player) after 41 passing touchdowns and 10 rushing touchdowns in 2019. This year's best dual-threat option.

The San Francisco 49ers have traded up for the third pick, but who is it they fancy? Jones is a no-frills quarterback who was the model of consistency at Alabama and claims to have a photographic memory. Led the top level of College football in 2020 for pass completion percentage and passing yards (4,500), but rushed for only 14, with Alabama beating Fields' Ohio State in the national championship game in January.

Also helped Alabama claim the national championship, winning the game's Offensive MVP and becoming the first wide receiver to win the Heisman Trophy since 1991 – over team-mate Jones, Lawrence and Florida quarterback Kyle Trask. Set school records for single-season receiving yards (1,856) and touchdowns (23) in 2020. Stands at 6ft 1in with a slight build but has an excellent skill set, with safe hands and neat footwork. 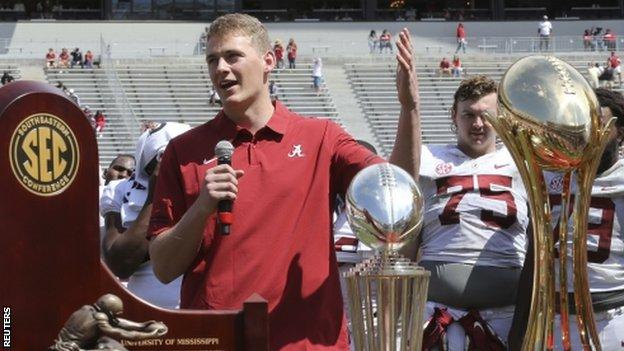 Mac Jones (above), DeVonta Smith and Jaylen Waddle helped Alabama win a host of trophies last season, including the national championship at the top level of College football

Alabama had two receivers go in the first 15 picks last year – Henry Ruggs and Jerry Jeudy – and Waddle hopes for the same this time round. Had 557 receiving yards from the first four games of 2020 before an ankle injury kept him out until the national championship game. The Combine being cancelled denied him the chance to challenge the 40m dash record. Could become the fastest player in the NFL.

Pitts is labelled a tight end but is more like a big receiver. At 6ft 6in and 250lbs, he's dominant in the air and didn't drop a single catch at Florida in 2020, making 43 grabs for 770 yards. A dynamic tight end who can also block on the offensive line, Pitts could be the first tight end drafted in the top five since 1972.

With the fifth pick, the Cincinnati Bengals may be tempted to go get an offensive tackle to protect the blindside of last year's top pick Joe Burrow, who performed admirably despite being left exposed in his rookie season. At 6ft 6in and 330lbs, Sewell offers plenty of protection and served as Justin Herbert's left tackle at Oregon in 2019 before opting out of the 2020 season because of the pandemic.

Chase also opted out of 2020 but in 2019 was the top receiver for Joe Burrow at Louisiana State University, ahead of Justin Jefferson. Registered 1,780 receiving yards and 20 touchdowns in 2019, including two scores as LSU beat Trevor Lawrence's Clemson in the national championship game. At 6ft, not the biggest receiver but still a dynamic playmaker who provides a physical presence outside.

Only had 17 starts at North Dakota State, leading them to a 16-0 record in 2019 and winning the national championship at the second highest level of College football. Had 28 passing touchdowns and 14 rushing in 2019, without throwing a single interception. Because of the pandemic, his team only had one exhibition game last year and a mixed display left question marks, so some analysts fear he or Mac Jones could fall down the board.

Get American Football alerts in the BBC Sport appSnooker-tastic!: The heroes and villains that helped snooker reach its glory yearsHave an evening in with films on iPlayer: From action to romance, there's a movie for everyone
Source