Trevor Lawrence had been destined for this moment for years.

Ever since he became the country's top-ranked quarterback in high school, he'd been touted as a future first overall pick in the NFL draft.

The Jacksonville Jaguars made the inevitable a reality, selecting a generational talent considered one of the safest prospects in draft history – up there with John Elway (1983), Lawrence's idol Peyton Manning (1998) and Andrew Luck (2012).

The 21-year-old had a remarkable record of 86 wins and four defeats across seven years in high school and college, but he is not only an exceptional athlete.

At 6ft 6in with long blonde hair, he looks the part too, yet he's remained the humble, grounded kid that turned up for try-outs in 2007.

From being the face of his hometown Cartersville since he was 14 to being recognised as the voice of college football by the US President, here's the story behind the boy next door set to be the NFL's next superstar.

The coach who moved his son to play Lawrence at quarterback

Lawrence's family moved from Tennessee to Georgia when he was five. Aged seven, he joined the Canterbury Bulldogs youth team and was earmarked as a running back.

Coach Dave Geros was set to play his son Garrett at quarterback but when throwing the ball around before practice, Lawrence went to fetch a loose pass, some 35 yards from Garrett.

He picked it up, dropped his shoulder and unleashed an inch-perfect spiral pass into Garrett's chest.

"It was perfect, beautiful," Dave Geros told BBC Sport. "Even at that age, I saw something in Trevor that normally you just don't see.

"He had something special. Athletically, mentally, socially – he's always been head and shoulders above everyone else." 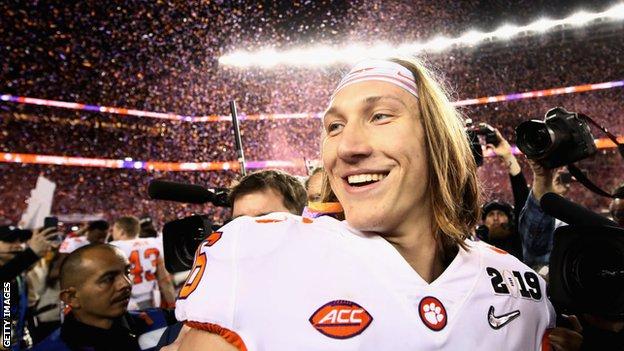 When Lawrence went to college at Clemson, he became the first quarterback since 1985 to win the national championship in his first year

Geros switched his son to wide receiver so Lawrence could play quarterback. And aged nine, a highlight reel of Lawrence appeared on YouTube. Aged 10, another clip described him as a "phenom".

Geros coached his son and Lawrence till they were 12, when they joined middle school. By the time they moved into high school at 14, Lawrence was 6ft 3in, being asked for autographs and doing media interviews.

"Everybody talked about this quarterback coming up and I was like 'how good can he be?'" said Matt Santini, the mayor of Cartersville, who has commentated on the 'Purple Hurricanes' for local radio since 1999.

"The first time he set foot on the field you went 'wow, this guy's different'. Against bigger schools, he was able to manage the game and do special things with the ball – the way it came out of his hand, the location of his throws."

Standing room only at Cartersville high

At both high school and college, it took just a handful of games for Lawrence to earn the starters' job.

At high school, wide receivers would transfer from 40 miles away to play on the same team, people travelled from out of state to watch. Cartersville's population is about 20,000 yet more than 5,000 fans were there every Friday. They had to erect temporary stands to meet demand.

Lawrence grew out his hair – his golden locks have had a Twitter parody account since 2016 – as he led the Canes to a 41-game winning streak over three seasons, winning two state championships.

"There was a lot of online chat before a game in 2016 and Cartersville went out and won 68-0," said Santini. "That put everybody on notice.

"Trevor was often brought out of the game because they were up by so many, but he'd still be encouraging his team-mates, talking to the back-up quarterback. Those things exemplify the type of leader and person he is.

"One of my favourite plays was when he ran over a linebacker for a touchdown. That took a lot of people by surprise.

"They figured 'he's tall, he's got the long hair, he doesn't want to get touched'. But he's a tremendously tough kid, he runs the ball extremely hard and doesn't mind getting hit at all. People learnt that through his college days."

Lawrence cemented his celebrity status at Clemson in 2018, becoming the first quarterback since 1985 to win the national championship in his first year.

In his second, the Tigers again reached the championship game, losing to an LSU side led by last year's top draft pick Joe Burrow.

"He's been a winner at every level. He's had high expectations his entire career and exceeded them. He's been in pressure situations and knows how to lead his team. Jacksonville will be a changed franchise because of him."

Finding his voice and chatting with Trump

Lawrence admits his Christian faith is more important to him than football. It's kept him calm amid the clamour, helping him develop into a leader and a man.

"God gave me these things for a reason, not just talent on the field, but other opportunities to be a light to people," he told Sports Illustrated in 2019.external-link

In 2016, Garrett Geros' football career ended after a car accident resulted in the lower part of his left leg being amputated. They were no longer close, but Lawrence still visited his old friend the very next day and continues to offer support.

In 2019, Lawrence heard that a classmate of his younger sister was set to go undergo a heart transplant, so when back home he visited the nine-year-old in hospital.

"Trevor didn't alert the media, nor should he have – he just decided to do it," said Santini. "He doesn't do things like that for attention, he does it because it's the right thing to do and it's inherently who he is.

"I admire him for what he does off the field as much as anything he's done on it. He's been a tremendous role model."

Last year he found his voice too. During the Black Lives Matter movement, he listened to his black team-mates and helped them organise a peaceful demonstration at Clemson. He called for change, vowing to "help any way I can".

He also launched the We Want To Play movement, speaking with then-President Donald Trumpexternal-link to help ensure there was a college season in 2020.

Lawrence and his partner Marissa set up a fundraising page for coronavirus victims, and after Jaguars fans contributed to the gift list for their wedding three weeks ago, the newlyweds donated $20,000 to Jacksonville charities.

"The love in his heart, I've never met anybody like him," said Dave Geros. "The man he is now, he's the same old kid he was."

Meyer is famed for playing a pass-based spread offence and Geros used his playbook when coaching an eight-year-old Lawrence. At both middle and high school, the team switched from a run-oriented game to suit the incoming quarterback talent.

Now he's going to play for Meyer in the NFL, but Lawrence doesn't want a fuss.

The people of Cartersville are keen to honour their hometown hero, but Santini's offer of a parade after his national championship win was politely declined by the family. The mayor said he'd keep asking though.

"He is Cartersville, everybody wants to show their love and appreciation," he added.

"I'd love to have him as grand marshal for our 4 July parade. If we can honour him in a way that uplifts other people, I hope he'll be amenable to that."

Zac Easter: He left his brain behind to save others from his fate