The 21-year-old was taken ahead of Zach Wilson, who went to the New York Jets, and Trey Lance who completed a top three of quarterback selections when picked by the San Francisco 49ers.

The Chicago Bears made a big trade to grab Ohio State's Justin Fields and Mac Jones became the fifth quarterback to go in the first round when selected by the New England Patriots.

It was the first time since 1999 that all three top picks were quarterbacks, and also the first time that the top seven selections were all offensive talent as tight end Kyle Pitts was followed off the board by wide receivers Ja'Marr Chase and Jaylen Waddle.

It was also the first time in their short history that the Jaguars had the first pick, and as luck had it that coincided with the emergence of Lawrence who has long been tipped as a superstar in waiting and the most NFL-ready quarterback to come out of the draft for years.

Jacksonville made no secret of their desire to partner Lawrence with new head coach Urban Meyer to lead the huge rebuilding process after the Jaguars finished with the worst record in the league last year – one win and 15 defeats. With five of the first 65 picks this year though they should have plenty of quality new recruits.

If the top two picks had been set in stone, mystery has shrouded who the 49ers would pick after they sprung a huge pre-draft shock by trading up into the third spot – and they went for the talented but inexperienced Lance – with just 17 starts at North Dakota State to his name.

Florida's Pitts became the highest drafted tight end in history when the Atlanta Falcons spent the fourth pick on arguably the most gifted player in the entire draft, and following Chase (Cincinnati Bengals) and Waddle (Miami Dolphins), Penei Sewell's selection by the Detroit Lions completed the historic top seven of offensive talent. 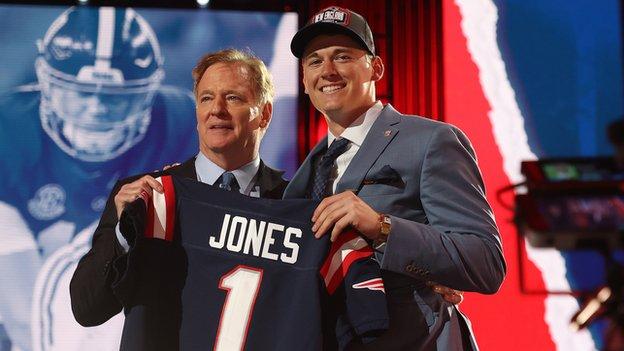 The Chicago Bears have made a big mess of the draft in recent years but they hope Fields can finally be their answer at quarterback after they gave up their first round pick next year and two other selections to the New York Giants to grab him with pick 11.

A record 51 quarterbacks have played for the Bears in the Super Bowl era – first contested in 1967 – but they now hope the talented Fields could be their man for years to come.

Patriots coach Bill Belichick had never drafted a first round quarterback before – having Tom Brady for two decades had something to do with that – so Alabama's Jones has a lot to live up to in New England.

One of the stories of the draft is Kwity Paye's path to the NFL, which included him being born in a refugee camp in Guinea during the Liberian Civil War and his mother escaping with him to Rhode Island when he was six months old.

His next stop is Indianapolis after being taken by the Colts at pick 21, and his first thought was to tell his mother that she was now retired after she took three jobs to get him to college.

An even bigger story almost overshadowed the entire draft, with news circulating about quarterback Aaron Rodgers, three-times voted the NFL's most valuable player, looking to leave the Green Bay Packers after a row over a new contract.

Packers general manager Brian Gutekunst insisted "we're not going to trade Rodgers" but they chose to bolster their defence by picking cornerback Eric Stokes instead of a receiver to help out their quarterback.

Draft back with a bang in Cleveland after 2020 virtual event

After a virtual event last year, the NFL's second-biggest event behind the Super Bowl was back with a bang with events held around host city Cleveland.

The Kings of Leon opened up the festivities and a red carpet event at the Rock and Roll Hall of Fame was held while the main stage for the selections was positioned with a backdrop of Lake Erie.

A year after Roger Goodell had to announce the picks remotely from his basement, the NFL commissioner was back on stage in person and, now fully vaccinated, was able to give his now customary 'bro hugs' to the college stars who were in attendance in Cleveland.

With Lawrence celebrating at home with his family, second pick Wilson was the first recipient of the commissioner's embrace. He was one of 12 high-profile players attending. A further 45 have been confirmed to take part virtually over the weekend with coronavirus still having a huge impact on the event.

Rounds two and three take place on Friday night with rounds four to seven concluding the three-day event on Saturday.

Full first round picks of the 2021 NFL Draft