Bumper contracts, a blockbuster trade and a quarterback carousel – it's been a busy free-agency period in the NFL. Here, BBC Sport takes you through this year's biggest deals. 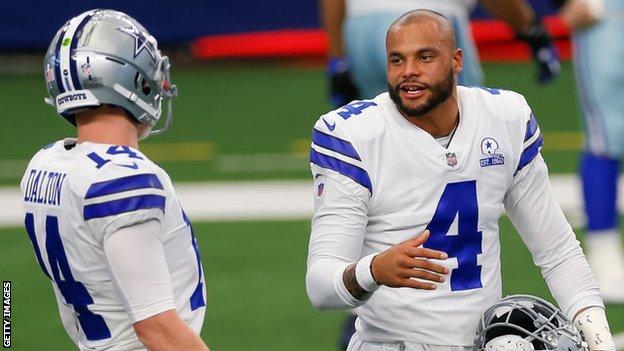 Talks over Dak Prescott's first big contract after his rookie deal had dragged on for a couple of years, yet a gruesome ankle injury early last season has actually worked in his favour.

The Dallas quarterback, 27, was on course to break the single-season passing record and the Cowboys have now recognised his value.

They handed Prescott a four-year deal worth $160m (£115m), making him the NFL's second-highest paid quarterback behind Patrick Mahomes. 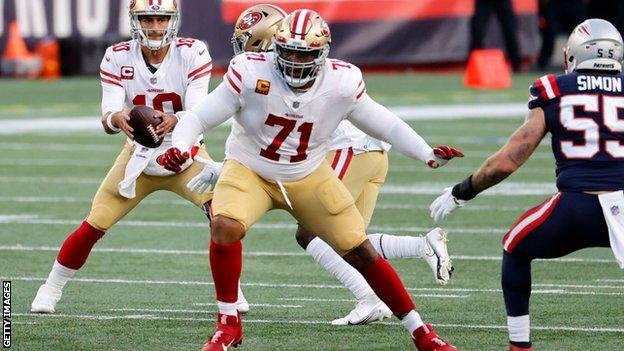 Left tackle is a key position as they protect the quarterback's blindside, and one of the league's best was set to hit the open market.

But the San Francisco 49ers shut down that possibility, making Trent Williams the highest-paid offensive lineman in NFL history.

Jared Goff – the Los Angeles Rams to the Detroit Lions 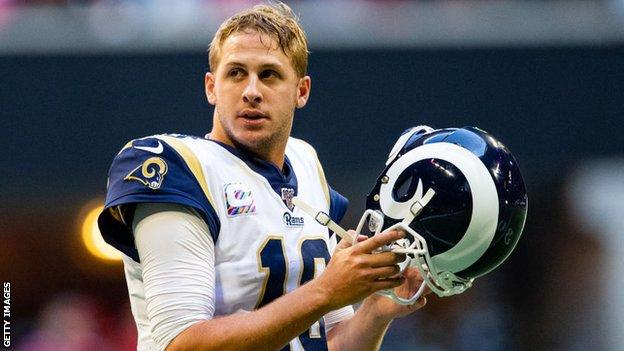 Jared Goff was rewarded with a huge extension after steering the Rams to Super Bowl 53 but 2016's number one draft pick has not developed as they hoped.

Although the Rams returned to the play-offs last season, many felt it was in spite of the 26-year-old quarterback, not because of.

So they agreed to trade Goff for Matt Stafford, throwing in three draft picks so Detroit would take on the four years and $106.6m (£76.3m) left on Goff's contract.

Matt Stafford – the Detroit Lions to the Los Angeles Rams 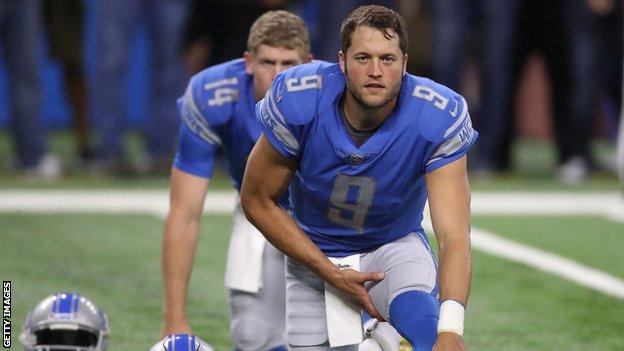 Stafford is 16th on the all-time list for career passing yards with 45,109

Detroit received plenty of offers after they and Matt Stafford, the number one pick in 2009, mutually agreed to part ways.

Despite having one of the league's most consistent quarterbacks, the Lions have reached the play-offs just three times in 12 years, losing at the first hurdle each time.

JJ Watt – the Houston Texans to the Arizona Cardinals 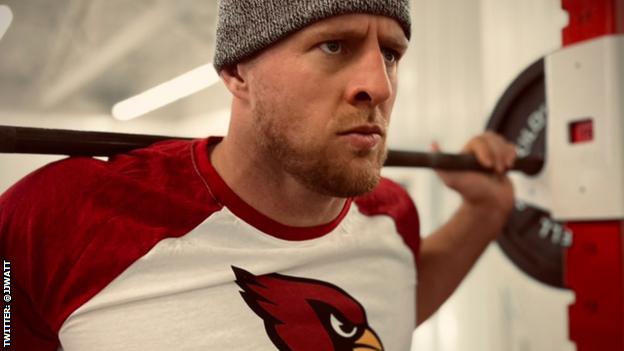 JJ Watt's frustration at Houston boiled over during a passionate media conference late last season, in which the star defensive end admitted "we stink".

The Texans finished the season 4-12, and after 10 years with the team Watt was granted a release, signing a two-year deal with Arizona worth $28m (£20.2m).

This offers the three-time Defensive Player of the Year, 31, a chance to show he remains among the league's best and finally reach a Super Bowl. The talent on New England's roster had gradually dwindled, resulting in the six-time Super Bowl winners enduring their first losing season in 20 years.

Now coach Bill Belichick has sought to remedy that with at least a dozen signings in free agency, with quarterback Cam Newton staying for another year.

And he'll have much better weapons at his disposal, notably wide receiver Nelson Agholor, who had a career-best 896 receiving yards with the Raiders last season. 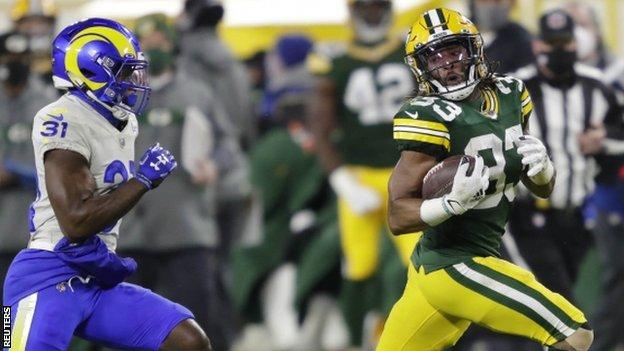 Jones has posted more than 1,000 rushing yards in each of the past two seasons

Green Bay quarterback Aaron Rodgers may have been named the NFL's Most Valuable Player for 2020 but the Packers aren't just about their passing game.

Only Derrick Henry, the Tennessee Titans' battering ram of a running back, has scored more touchdowns over the past two seasons (35) than Green Bay running back Aaron Jones (30).

So the Packers offered a four-year deal worth $48m (£34.5m) to keep together their dynamic offensive tandem of Jones, 26, and wide receiver Davante Adams. 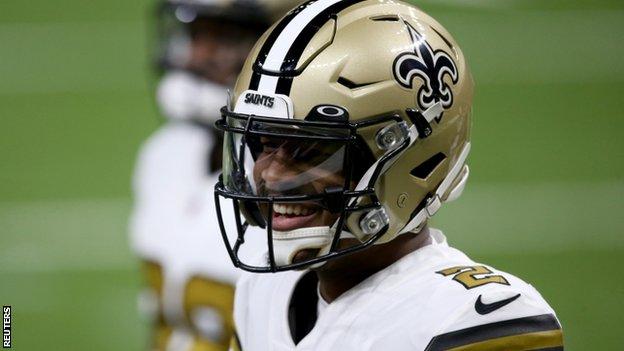 For the first time in 16 years, New Orleans will begin a season without Drew Brees as starting quarterback after the veteran retired at the weekend.

Jameis Winston, 27, then signed another one-year deal and Saints coach Sean Payton is willing to let him compete for the quarterback role with utility man Taysom Hill.

With offensive threats like Alvin Kamara and Michael Thomas at his disposal, this could be the best chance for 2015's number one draft pick to re-establish himself as an NFL starter.

Carson Wentz – the Philadelphia Eagles to the Indianapolis Colts 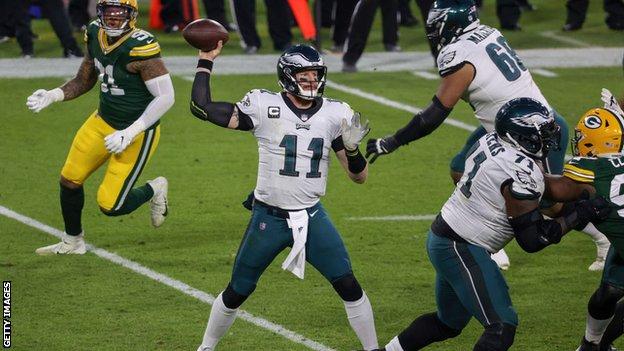 In his second season, Carson Wentz put the Eagles in Super Bowl contention in 2017 before injury denied him the chance to finish the job.

The quarterback, 28, signed a big extension but pushed for a trade after being benched for rookie Jalen Hurts last season.

The Colts look the perfect fit as head coach Frank Reich was previously Philly's offensive coordinator and they traded two draft picks to make Wentz a longer-term option than Philip Rivers, who retired after a year with Indianapolis.

Ryan Fitzpatrick – the Miami Dolphins to the Washington Football Team 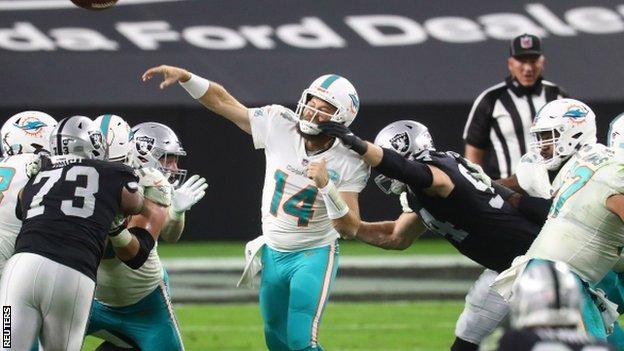 Washington are Fitzpatrick's ninth team in 17 seasons in the NFL

Journeyman quarterback Ryan Fitzpatrick has become a fans' favourite in the twilight of his career by pulling off some gutsy plays and thrilling fightbacks.

After helping rookie Tua Tagovailoa settle in at Miami last season, the 37-year-old has signed a one-year deal with Washington, who have released Dwayne Haskins and veteran Alex Smith.

After some lean years in Washington, a sprinkling of 'Fitzmagic' could help revive the franchise.

In other quarterback moves, Miami have signed Jacoby Brissett from the Indianapolis Colts while the Houston Texans have brought in Tyrod Taylor from the Los Angeles Chargers.