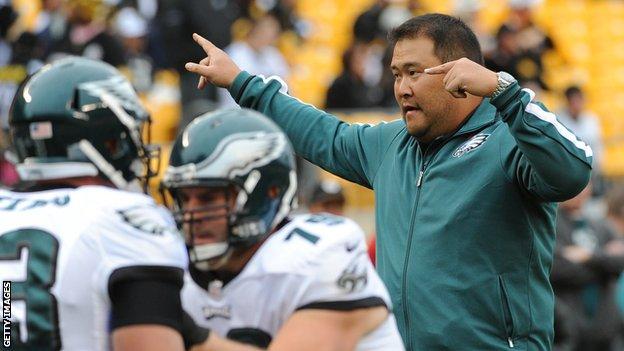 Chung's last NFL coaching job was with the Eagles, who did not renew his contract in 2019

The NFL will launch an investigation after assistant coach Eugene Chung said he was told he was "not the right minority" during a job interview with a team.

Chung, who is Korean-American, made the claim last week during a webinar with the Boston Globe.

The NFL said: "That comment is completely inappropriate and contrary to league values."

Chung, 51, did not get the job he was interviewing for.

"I was like, 'Wait a minute. The last time I checked, when I looked in the mirror and brushed my teeth, I was a minority,'" said Chung, who did not identify the team or individual who made the comment.

He told the Boson Globe that he hopes to become the NFL's first Asian-American head coach.

NFL franchises must follow the 'Rooney Rule' that states teams must interview at least one black, Asian or minority ethnic candidate for each head coach and general manager vacancy.

"We will review the matter," the NFL said in a statement.

It added: "The NFL and its clubs are committed to providing equal employment opportunities to all personnel in a manner that is consistent with our commitment to diversity, equity and inclusion."

Chung, who played for the New England Patriots, Jacksonville Jaguars and Indianapolis Colts between 1992 and 1997, has previously coached with the Kansas City Chiefs and Philadelphia Eagles.

"It was said to me, 'Well, you're really not a minority,'" Chung told the Boston Globe. "It was absolutely mind-blowing to me that, in 2021, something like that is actually a narrative."