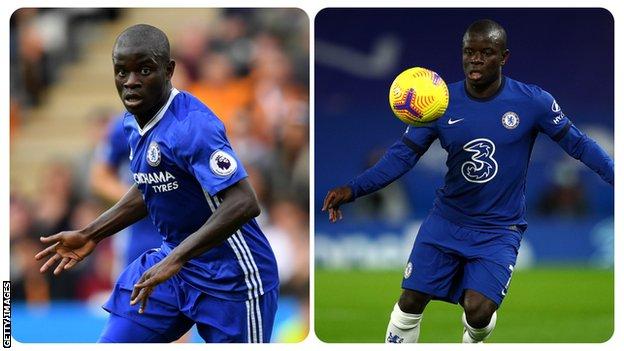 N'Golo Kante delivered a man-of-the-match performance as Chelsea swept Atletico Madrid aside to reach the quarter-finals of the Champions League.

The 29-year-old was imperious throughout – bringing back memories of how he propelled the Blues and Leicester to Premier League titles in successive seasons.

And it seems the French World Cup winner has already won an admirer in Thomas Tuchel, who took over as Chelsea manager in January.

"If you play with N'Golo you always play with a minimum half a man more; this is unique," said the German.

"It is a pleasure to be his coach, he is a big gift for me, a guy so, so humble, and who is such a big helper on the pitch.

"But don't underestimate his quality in passing, dribbling and escaping the pressure. Mateo Kovacic and N'Golo needed to step up because we missed Jorginho. They knew we would rely on them, and they delivered."

When is the Champions League quarter-final draw and who is through?

'He looks about five years younger'

Kante has already beaten the number of tackles and interceptions he made during last season's injury-hit campaign and is on course to improve on his Premier League figures from the 2018-19 season.

Against Atletico he superbly subdued the Spanish side by winning possession a remarkable 13 times – more than any player on either side and also had the second most touches and passes in the game.

"Not only does he have the physical capabilities, he's got that canny ability to be in the right place at the right time," Cole said on BT Sport.

"Players don't get round him. It's like having two men in there in one. He looks about five years younger again. He is back to his best. He dribbles. He can pass. He's fantastic."

Fellow pundit Rio Ferdinand added: "He's like a magnet to the ball. He looks like the Kante that played for Leicester when they won the league."

Speaking on BBC Radio 5 Live, former Chelsea and England winger Carney said Kante and Kovacic should be held up as examples to young players learning their trade.

"If you want to be a midfielder, you just have to watch them play. They are brilliant," Carney said.

"They're brave in possession and they get it in tight areas and play out. A lot of people criticise Kante and say he's only a defensive midfielder. He was dribbling he was driving. They completely dominated and it wasn't as if they were up against average midfielders."

Ferdinand echoed those sentiments, adding: "He's doing both sides of the game now, he's winning the ball but when there's a transition he can get up and beyond things."