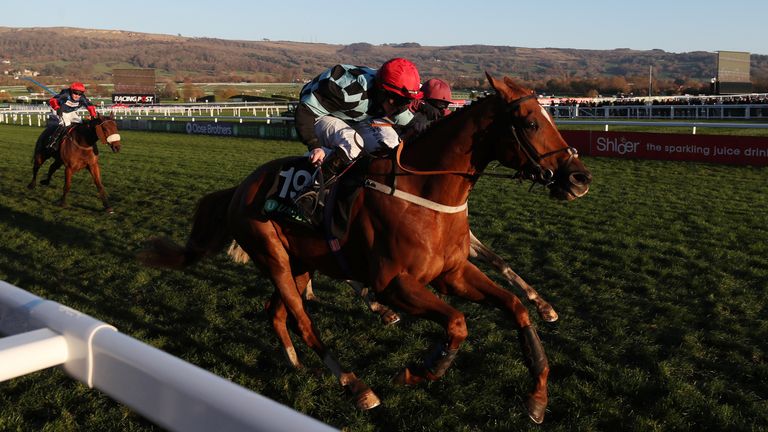 Brian Ellison was delighted to see Nietzsche bag his biggest victory over fences to date with battling performance in the Hillhouse Quarry Handicap Chase at Ayr.

Winner of the 2018 Greatwood Hurdle at Cheltenham, the eight-year-old had been running consistently well in competitive handicap chases all season, most recently finishing eighth in the Ultima Handicap Chase at the Cheltenham Festival.

Ridden by Johnny Burke, Nietzsche was a 6-1 shot for the Listed feature on the opening day of the Scottish Grand National meeting – and after taking over from Voix Du Reve on the run-in, had just enough in reserve to repel 15-8 favourite Not That Fuisse by a neck.

“He’s won four races on the Flat, he’s won a Greatwood Hurdle and was third in the Fred Winter at Cheltenham (in 2017). He probably would have won that day if he didn’t hit the front too early.

“He ran at the Festival last time and was third at Cheltenham before that. He’s a good horse.

“Johnny gave him a good ride. He wanted to get there after the last and that’s what he did.”

While out of luck with Not That Fuisse, Harry Skelton extended his lead in the race to be crowned champion jockey to four courtesy of a first- and last-race double.

The rider teamed up with brother Dan to win both the Tennent’s Lager Novices’ Hurdle with 4-9 favourite Stepney Causeway, and the Book Your Staycation At Western House Hotel Handicap Hurdle with 11-2 chance I’d Better Go Now.

Stepney Causeway was winning his fourth successive race over obstacles when scoring by 19 lengths in the opener, but could be set for a return to the Flat.

His trainer said: “He’s a remarkable horse, to be honest. He’s just improving rapidly and it was great to see him do it like that.

“On his first run for us we ran him in soft ground and right-handed and it turned out that’s everything he doesn’t want. We’ve since run him left-handed on better ground and he’s won four.

“He’ll have an entry in the Swinton Hurdle at Haydock and he’s also entered in the Chester Cup. He won’t get in the Cup, I don’t think, but he could get in the consolation race (Chester Plate).

“The horse in the last (I’d Better Go Now) is very good fresh and Harry gave him a brilliant ride.”

The brace took Harry Skelton to 143 winners for the season, with reigning champion Brian Hughes on 139 after drawing a blank.

His brother added: “Harry is four clear, but I keep saying it, it’s not enough!”

Both jockeys are in action at Bangor on Saturday before returning to Ayr for Sunday’s Coral Scottish Grand National.