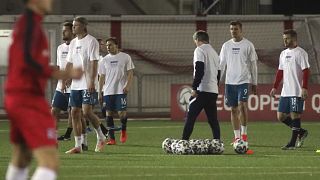 Qatar was a controversial choice to host the next World Cup in 2022.

The Gulf nation has been under scrutiny because of its discriminatory laws and conditions for the migrant workers who are helping to build infrastructure for the event.

There has been much debate in Norway over the Qatar World Cup with several top-division clubs, including Rosenborg and Tromso, calling for an outright boycott.

On Wednesday, before Norway’s match versus Gibraltar, made their feelings clear with the t-shirts, which also had RESPECT emblazoned across them. Coach Stale Solbakken also got involved in the protest.

Norway went on to win their match 3-0. They have now won four of their last five World Cup preliminaries.

Solbakken had warned on Tuesday that players would use their clash with Gibraltar to make a statement.

“I have the impression that a lot (of players) are interested in this, care about it and want to do something to try and contribute in a good way,” he told a press conference.

“It’s about putting pressure on FIFA (football’s governing body) to be even more direct, even firmer with the authorities in Qatar, to impose stricter requirements.”

A poll released on Monday by the Verdens Gang newspaper found that 55 per cent of Norwegians would back a boycott, with 20 per cent against it.

The Norwegian Football Federation announced on Wednesday that a 14-people committee has been established to work out what the country “should do to respond to Qatar’s crackdown of human rights in the country, including researching, assessing and determining which instrument Norwegian football shall use for its response.”

The committee is made up of people in and outside of football.