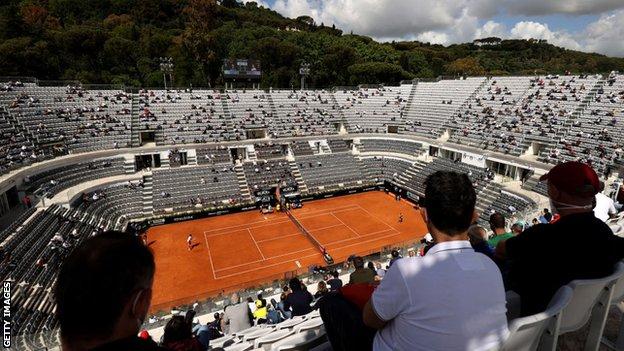 World number one Novak Djokovic reached the Italian Open quarter-finals for the 15th time in a row with a straight-set win over Alejandro Davidovich Fokina.

The defending champion dropped his opening serve but recovered immediately to beat the Spanish qualifier 6-2 6-1.

He was bad-tempered in his previous match but here he was serene as he savoured the return of fans in Rome.

Second seed Rafael Nadal is in action later on Thursday when he takes on Canada's Denis Shapovalov.

Meanwhile, Britain's Andy Murray is back in doubles action alongside Liam Broady when they face Germany's Kevin Krawietz and Romania's Horia Tecau – the eighth seeds – in the second round.

The previous rounds of the tournament had been held behind closed doors but on Thursday the venue welcomed back spectators with 25% capacity allowed.

"It was not good, it was great. I missed the crowd," the five-time champion Djokovic, 33, said.

"It was nice to see them back."

After losing his opening service game, Djokovic went on to outclass his opponent – who staged some late resistance by saving five match points – in a clinical display.

He said his performance had been "at least 20-30% better" than against American Taylor Fritz in his opening match on Tuesday, when he was unhappy with the playing conditions and had been prone to errors.

Djokovic will take on Greek fifth seed Stefanos Tsitsipas or ninth seed Matteo Berrettini of Italy for a place in the semi-finals.

'I stole £70,000 to feed my addiction': Meet the young gamblers struggling to overcome betting's mental gripThe Joe Wicks Podcast is back: He talks to Sir Mo Farah about choosing a positive route in lifeLive scores, results and order of playAlerts: Get tennis news sent to your phone
Source