The world number one continued his dominance at Melbourne Park with a 7-5 6-2 6-2 dismantling of Daniil Medvedev.

Djokovic won the title despite tearing an abdominal muscle during the third round, which impacted his training.

"Emotionally it was one of the hardest tournaments that I've ever had, to be honest," the Serb, 34, said.

"It was very challenging to keep my mind serene and focus on what matters the most.

"I've put a lot of energy and time to be sitting here with the trophy." 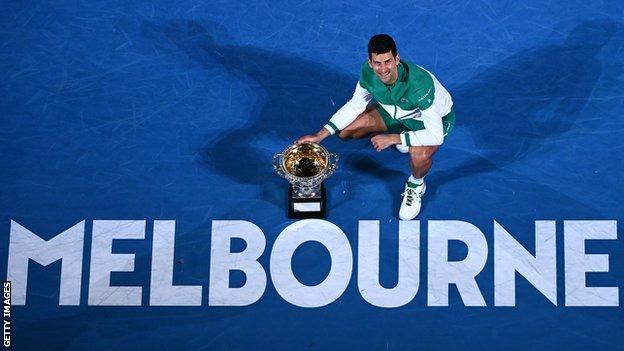 Djokovic's victory leaves him two Grand Slams behind Roger Federer and Rafael Nadal in the three-way battle to finish with the most men's titles.

"Most of my attention and my energy from this day forward, until I retire from tennis, is going to be directed in majors, trying to win more major trophies," said Djokovic.

"Roger and Rafa inspire me. That's something that I've said before. I think as long as they go, I'll go."

Next month Djokovic is guaranteed to reach one of his major career goals by surpassing Federer's record of 310 weeks at world number one.

Djokovic's victory comes with the backdrop of the coronavirus pandemic and players forced into a 14-day quarantine on arrival.

He was heavily criticised in the Australian press for a letter he wrote to tournament director Craig Tiley about the quarantine protocols.

He returned to Australia as defending champion after a challenging 2020 on and off the court.

He was widely criticised for organising the Adria Tour – a Balkans-based tournament featuring several ATP players – in the middle of the pandemic.

When the tour resumed, he was defaulted from the US Open after accidentally hitting a line judge with a ball he had swatted away in anger, before being thrashed in the French Open final by Rafael Nadal.

"Last season was what it was: six months with no tennis in the middle of the season," Djokovic said.

"I have managed to start the season very well throughout my career and it sets the tone for the rest of the season for me.

"I have added motivation to perform well here. It gives me extra wind in my sails." 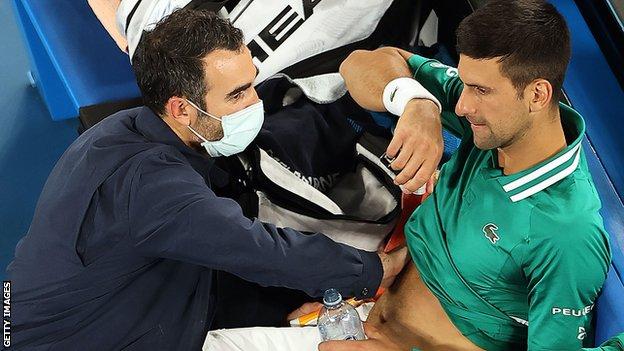 Djokovic suffered an abdominal injury against Taylor Fritz, leaving him barely able to serve and move against the American.

He said after the match he believed he had torn a muscle but refused to elaborate further, instead opting not to train before any matches.

His recovery against Fritz – and his subsequent improved movement in the next rounds – led some to question how serious the injury was.

"It is a tear of the oblique muscle and I felt it straight away," he explained after beating Medvedev.

"I know there has been a lot of speculation, people questioning whether I'm injured, how can I recover so quickly. I get it.

"I just felt like it was a bit unfair at times. But it's not the first or the last time."

Djokovic's presentation with the trophy came after Tennis Australia executive Jayne Hrdlicka was booed for mentioning the Covid-19 vaccine and the Victorian government.

The unusual scenes came at the end of a tournament that was delayed three weeks because of coronavirus and had to bar fans for five days when state authorities ordered a snap lockdown.

Medvedev envious of 'cyborgs of tennis' 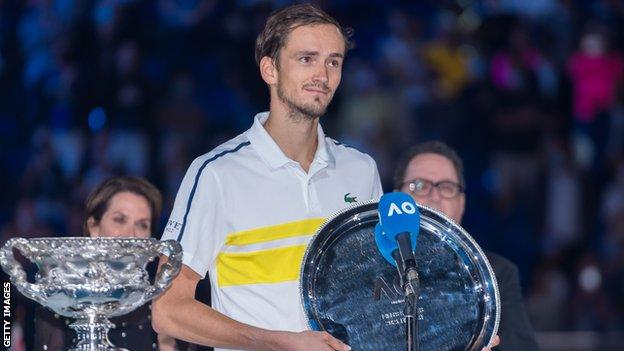 Going into the final, in-form Medvedev had playfully insisted "all the pressure" was on Djokovic because of his desire to catch Nadal and Federer.

He had won three of his past four meetings against Djokovic and competed well in a tight first set, before crumbling against a player he described as "the King of Melbourne".

Medvedev lost his first Grand Slam final to Nadal at the US Open in 2019, and his defeat here means Dominic Thiem is still the only male player born after 1988 to win a Grand Slam.

"To win nine Australian Opens, I need to win every year until I'm 34," Medvedev said.

"I believe in myself, but I don't think I'm able to do it.

"Same with Rafa, 13 Roland Garros. We're talking about some Cyborgs of tennis. They're just unbelievable."