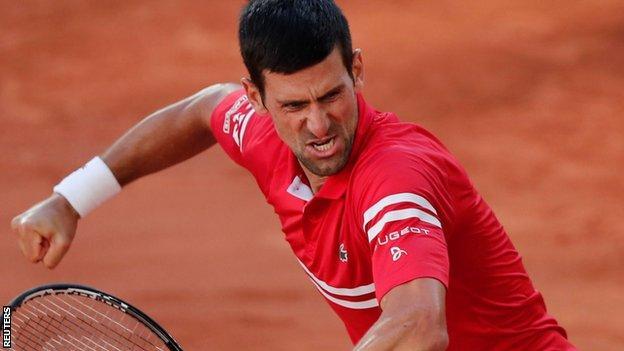 Novak Djokovic says "everything is possible" as he targets a 'golden' Grand Slam in 2021 after winning the French Open for the second time.

The 34-year-old Serb has won both majors this year after lifting the Australian Open title in February.

He defends his Wimbledon title this month before the Olympics and US Open.

"I have put myself in a good position to go for the Golden Slam," said Djokovic, who won his 19th major by beating Stefanos Tsitsipas in Paris.

"Everything is possible. I've achieved some things that a lot of people thought it would be not possible for me to achieve."

The world number one fought back from two sets down as he outlasted Greek fifth seed Tsitsipas to win at Roland Garros on Sunday.

Djokovic, also champion at Roland Garros in 2016, became the first man to win all four Grand Slams twice since the fully professional Open era began in 1968.

Shortly afterwards, his coach Marian Vajda said the player's goal was to win Olympic gold at the delayed Tokyo Games before completing a calendar Grand Slam at the US Open in September.

But Djokovic was quick to point out he was in the same position in 2016 and then lost in the third round at the All England Club.

"I will enjoy this win and then think about Wimbledon in a few days' time," he said.

"I don't have an issue to say that I'm going for the title in Wimbledon. Of course I am.

"Hopefully, I can use this confidence that I have right now [to take] into Wimbledon, as well. Then let's take it from there." 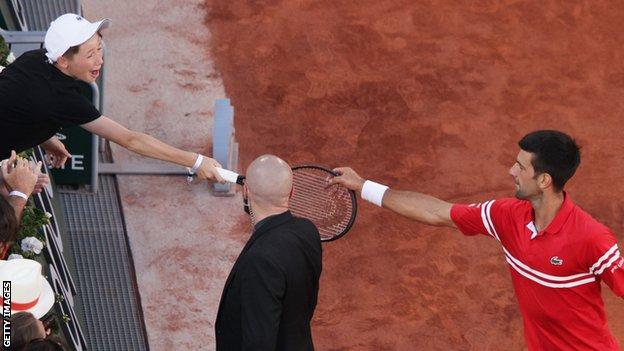 After sealing victory, Djokovic went over to the stands and gave his racquet to a young fan who the Serb said had been providing tactical advice as well as support.

The youngster was beside himself with joy after being given the gift, looking incredulous as he bounced up and down in delight.

"I don't know the boy, but he was in my ear the entire match basically, especially when I was two sets to love down," a smiling Djokovic said.

"He was encouraging me. He was actually giving me tactics, as well. He was like, 'hold your serve, get an easy first ball, then dictate, go to his backhand'.

"He was coaching me – literally.

"I found that very cute, very nice. So I felt like to give the racquet to the best person was him after the match.

"That was kind of my gratitude for him sticking with me and supporting me."

The 'golden' Slam is an immense task – analysis

Novak Djokovic could not have picked a tougher year to try and complete the Golden Slam.

Sam Querrey interrupted his plans in 2016, in the third round of Wimbledon.

But this year – for the first time in seven years – there are only two weeks between the French Open and Wimbledon, and the pandemic makes the task even more onerous.

There were two weeks' enforced quarantine before the Australian Open; the Wimbledon fortnight will be spent exclusively on site or at the hotel; and who knows quite what the Tokyo Olympics will bring.

Djokovic has all the qualities required, but the challenge is an immense one.

The men's draw at Wimbledon could prove unpredictable, as most have not played on grass for two years.

Djokovic's grass-court touch will not have deserted him, but there is no way he, Rafael Nadal and Stefanos Tsitsipas will be able to shake off all that Roland Garros fatigue in such a short space of time.