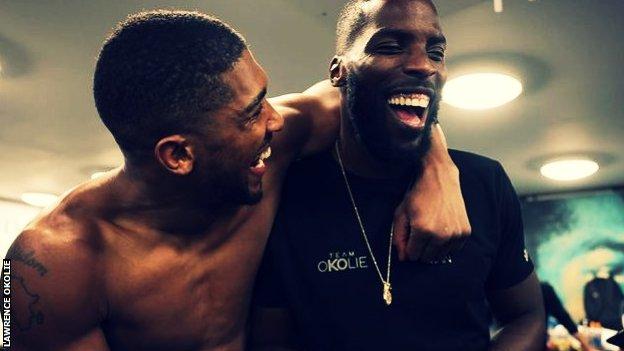 "I love him so much, look at my handsome son. He's so dashing."

Lawrence Okolie's mother – Elizabeth – is rewatching some of her son's 15 professional fights.

The child who was once ridiculed for his African heritage – and later for his weight – may not be the "professor" she hoped he may be but she likes the sound of him becoming WBO cruiserweight champion.

On Saturday Poland's Krzysztof Głowacki is all that stands between Okolie and world champion status.

Okolie: From McDonalds to Matchroom 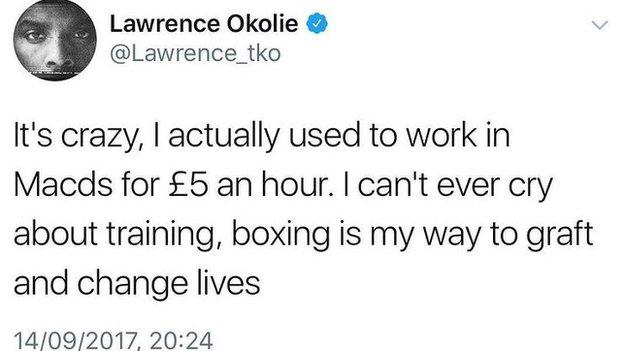 In 2017 Okolie tweeted about his former role, adding: "May I always stay focused, humbled and appreciative of the life I'm living"

"It's good to show myself how far I've come from being that kid who was being bullied and overweight," Okolie says as he walks through his childhood Hackney neighbourhood with BBC Radio 5 Live.

"That was the kid struggling to run laps. We started when I was losing weight jogging around this block. It takes six or seven minutes. I remember being able to do one and then being really proud of myself to get around it twice."

Okolie had had enough of the insults he experienced in his school years, insults that turned into physical altercations at a time where his confidence and sense of self-worth made him an "easy target".

His journey to get in shape led him to boxing and success in university tournaments put him on the radar of those in charge of selecting Team GB's hopefuls.

In 2012 he had watched Anthony Joshua, Nicola Adams and Luke Campbell win medals while he worked in McDonalds. Now he is in position to be the first man from Team GB's 2016 Olympic team to win a world title as a professional.

"We've had so many great world champions in history so to add my name to that list is going to be amazing," adds Okolie. "I'm going to go out there and do what needs to be done to bring the belt home." 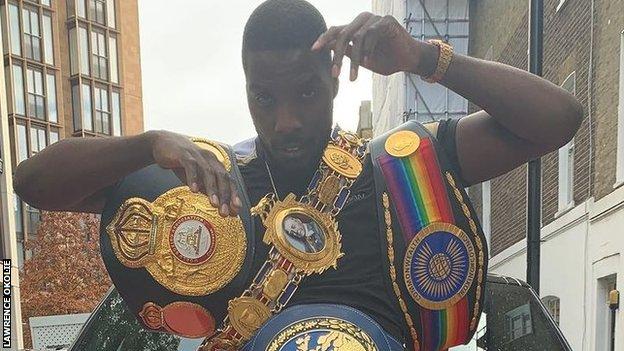 Okolie's transition from shy teenage target to confident 28-year-old is stark. He enjoys the input offered by world heavyweight champion Anthony Joshua's management company and recently branched out by following his passion for rap to release his own song – TKO.

Okolie has helped his mother Elizabeth renovate the house in which he grew up and the vacant WBO cruiserweight title would undoubtedly sit in pride of place on the family mantelpiece. It is a home where recordings of his fights – amateur and professional – are meticulously saved.

"For me, already he is a world champion," says Elizabeth as she hits play on a recording. "Being an African parent, we want our children to go to university to become a professor. For us, education matters. When he started the boxing I wasn't aware and he said it was just for fun. After six months he said 'they've told me I am really good'. When he started competing I didn't know. He knew I would have said 'no'."

Asked what it is like to watch her son fight live, she replies: "You don't want to know. As the time gets closer, my heart is having palpitations. It is difficult as a parent. When he fights anyone I will go online and check them out. Then I have discussions with him about them as well. I think I am his number one fan."

'A threat to extraordinary progress' 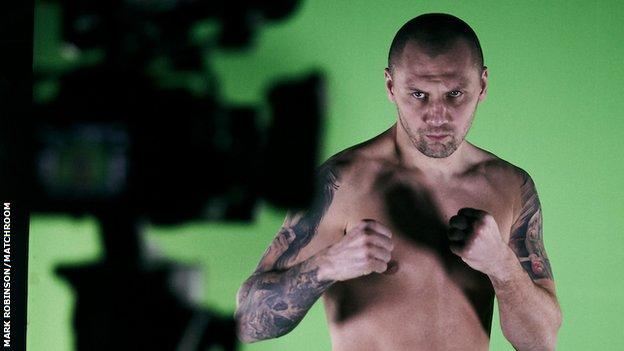 In following her son's journey, Okolie's mother has witnessed 15 professional wins and a healthy amount of criticism after bouts that delivered victory but lacked entertainment.

To his credit, Okolie has reeled off five stoppage wins and while he has undoubtedly found a slicker way to operate in the ring, former world champion Glowacki represents his stiffest challenge to date by a distance.

"He has changed and there has been a maturity about him with his boxing and it's come with time and experience," says 5 Live commentator Mike Costello.

"We should remember he had just around 25 or 26 amateur contests and now 15 professional contests. So 40 in all. I know these are different sports but imagine Andy Murray after 40 tennis matches. If you look at it that way he has made extraordinary progress.

"Okolie is the odds-on favourite but that is because we haven't seen Glowacki in the ring since 2019. Glowacki has lost only against the very best in the cruiserweight division and if the Glowacki of old turns up, it will be a very difficult night for Okolie."

Okolie's mother has undoubtedly already analysed what former world champion Glowacki will bring to the table at London's SSE Arena and delivered her scouting report.