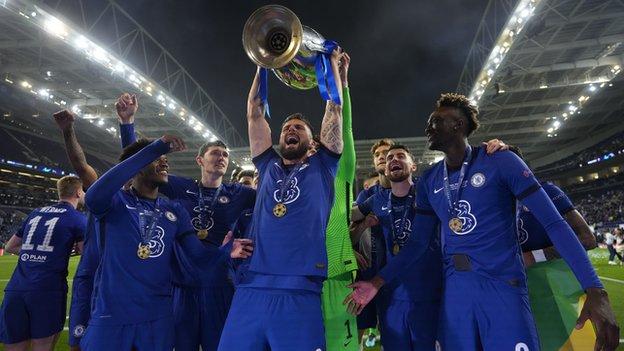 Olivier Giroud has thanked Chelsea for the "special memories" as the striker moves closer to joining AC Milan.

The French international, 34, is expected to sign a two-year deal with the Serie A side and could complete the move by the end of the week.

In a Twitter post, Giroud wrote: "I'm starting a new journey with a light and happy heart.

"Our victories in FA Cup, Europa League and Champions league have been magnificent."

Chelsea would be able to command a transfer fee for the forward, who scored 11 goals in 31 appearances last season.

"To all the Blues, to my teammates, to all my coaches, to the whole club, a huge thank you for these special moments," he wrote.

Giroud joined Chelsea from rivals Arsenal for £18m in January 2018 and last month extended his contract until 2022.

The World Cup winner, who came on as a substitute in France's defeat to Switzerland in the last-16 of Euro 2020, has scored 39 goals in 119 appearances for the club.