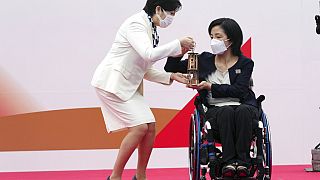 The Olympic torch ceremony on Friday was a muted affair with no spectators present as Paralympian, Aki Taguchi and former tennis player Shuzo Matsuoka handed the eternal flame over to Tokyo Governor Yuriko Koike.

The ceremony marked the countdown to the Opening of the 2020 Games in what was likely a sign of things to come for the postponed event.

Japanese officials recently announced that fans would not be allowed to attend most events amid a state of emergency in the country due to the pandemic.

What was once an occasion that excited the masses in Japan has now turned bitter, as people have taken to the streets to call for the cancellation of the games amid fears of COVID-19.

The rise in infections forced the city to move the torch relay away from the capital’s streets.

It has repeatedly been rescheduled away from the public since it began in March.

It remains unclear how the torch will enter the stadium for the opening ceremony; the games are due to begin on 23 July.