Paolo Odogwu tore his anterior cruciate ligament during Wasps’ Premiership defeat to Northampton Saints; the versatile back will see a knee specialist on Friday; Wasps have already lost Joe Launchbury and Jack Willis to knee injuries this season 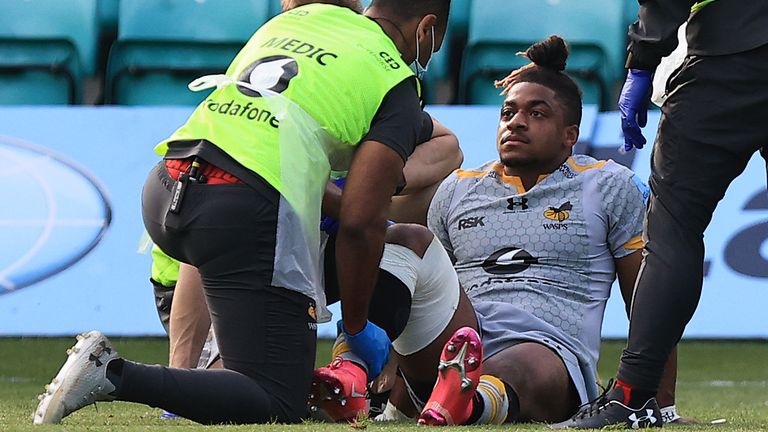 Wasps back Paolo Odogwu faces a lengthy spell on the sidelines after scans confirmed he tore his anterior cruciate ligament against Northampton.

Odogwu was forced off during the second half of Wasps’ Premiership defeat at Franklin’s Gardens on Saturday.

An MRI scan revealed a torn ACL and the 24-year-old will see a knee specialist on Friday ‘for assessment and management planning’.

Odogwu was named in Eddie Jones’ England squad for this year’s Six Nations and while he did not feature, he was expected to make his international debut in next month’s Tests against the USA and Canada.

“This is obviously a heart-breaking end to probably the best season of my life, but these things happen,” said Odogwu, who scored nine tries in 15 appearances for Wasps this campaign.

“There is a long road ahead, but we move, and of course stay composed.”

Odogwu is the latest Wasps player to suffer a serious knee injury. Club captain Joe Launchbury ruptured his ACL in April, ruling him out of this summer’s British and Irish Lions tour, while fellow England international Jack Willis tore his medial collateral ligament on his Six Nations debut against Italy in February.