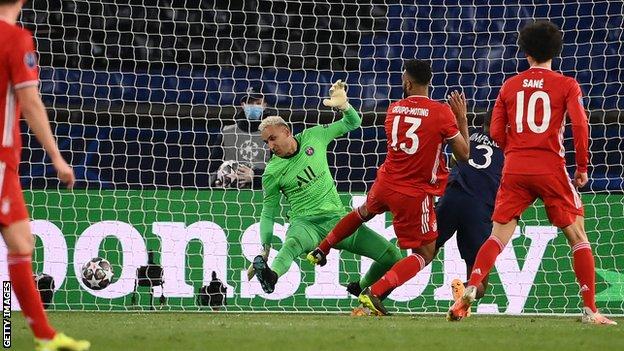 Paris St-Germain were beaten on the night but held on to claim an away-goals victory over holders Bayern Munich that takes them through to the last four of the Champions League.

In a fascinating second leg between the sides that contested last year's final, PSG were threatening on the break, testing visiting goalkeeper Manuel Neuer a number of times and twice hitting the woodwork through Neymar.

It was Bayern, though, who broke the deadlock, giving themselves hope of a comeback win as Eric Maxim Choupo-Moting rose highest to follow-up David Alaba's saved shot with a close-range header.

Missing the injured Robert Lewandowski, the German side lacked their usual ruthlessness up front and were unable to find the second goal that would have continued their trophy defence.

Kylian Mbappe thought he had sealed the tie with just over 10 minutes to go, but after breaking clear and firing in the assistant's flag ruled his effort out.

PSG will face either Borussia Dortmund or Manchester City in the semi-finals, with the latter holding a 2-1 advantage going into Wednesday's second leg in Germany.

While this result will go some way towards exorcising the demons of last season's final loss to Bayern, true redemption for PSG will only come if they can taste victory in Istanbul at the end of May.

It wouldn't be PSG, though, with their recent humbling history of throwing away Champions League leads, if they did so with little fuss or drama and Tuesday's tie was more nerve-jangling than it needed to be for the French side.

Soaking up pressure and using the pace and trickery of Neymar and Mbappe on the break, they were the more threatening side for much of the contest.

In the first half, Neuer and the goal frame repeatedly stood between them and an opening goal that would have swung the tie heavily in their favour.

But Choupo-Moting's goal, coming moments after Neymar had struck both the bar and post with shots in the space of three minutes, ushered back memories of Manchester United's comeback-win in Paris in the last 16 in 2019.

Progress is being made in front of us, though, and PSG were able to reset, re-focus and largely manage the game during a second half in which Bayern again held the larger share of possession of territory but not the required guile.

Eight months on from Lisbon, PSG still have their speed and trickery in attack, but now look to have married it to a much-needed discipline and resolve under Mauricio Pochettino.

With his Tottenham side having lost the 2019 final to Liverpool, Pochettino has Champions League final demons of his own to vanquish.

Get past Borussia Dortmund or Manchester City in the last four and he and his new side will get their chance.

With 64% of possession and 31 shots to PSG's six, Bayern had themselves and the brilliance of Mbappe to blame for losing the first leg on home soil.

They were able to edge the second leg, but with 14 shots to their name they will again reflect on a performance lacking in the requisite ruthlessness.

They may top the Bundesliga but Bayern have clearly gone backwards since blowing the competition away in the condensed conclusion to last season's Champions League tournament.

An ill-timed injury to Lewandowski, positive Covid-19 test for Serge Gnabry and behind-the-scenes problems between the club's hierarchy and coach Hansi Flick have not helped their cause.

Sane summed up their night, wasting a good chance from inside the box in the first half and then, in the game's final act, stroking a tame low cross into Navas' grasp with team-mates in abundance in the box.

Be it with Flick in charge or not, they will undoubtedly challenge again, but for now they must focus all their efforts on their domestic campaign and watch on enviously next month as another side takes the Champions League trophy away from them in Istanbul.