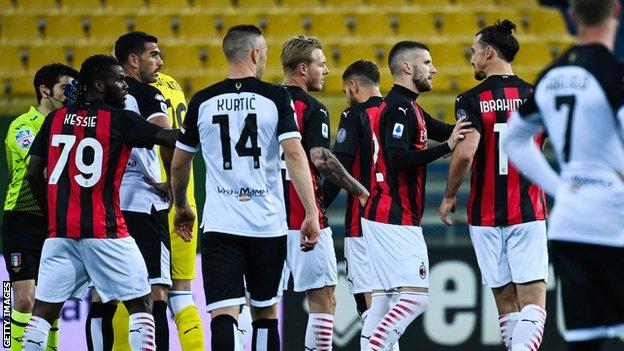 Since Zlatan Ibrahimovic first joined Milan in the 2010-11 season, only Gabriel Paletta (five) has been sent off for them in Serie A more than the Swede (four)

Zlatan Ibrahimovic was sent off for dissent as AC Milan beat Parma to maintain their slim Serie A title hopes.

The 39-year-old Sweden striker was shown a straight red card after an hour for saying something to the referee, with his side 2-0 up.

He had set up Ante Rebic for the first and was involved in Franck Kessie's goal just before the break.

"Zlatan told me that he argued with the referee and it lasted some time," Milan coach Stefano Pioli told Sky Sport Italia. "He assured me that he did not disrespect him and above all he did not offend."

Milan are eight points behind leaders Inter Milan, who face Cagliari on Sunday.

Before the game, Milan technical director Paolo Maldini said Ibrahimovic was close to signing a new deal with the club.